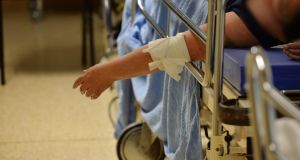 The HSE is already facing the threat of industrial action by tens of thousands of doctors and nurses in the new year. Photograph: Alan Betson

The likelihood of serious industrial unrest in the health service is set to increase further with an announcement on Wednesday that 30,000 support staff are to ballot on strike action.

Siptu plans to ballot healthcare assistants, radiographers, home helps and other grades on a variety of pay issues next month. The HSE is already facing the threat of industrial action by tens of thousands of doctors and nurses in the new year.

The union is seeking access for up to 12,000 home helps and healthcare assistants to an evaluation scheme and believes the outcome of this process will result in many staff being paid more.

Under such job evaluations, if a person’s role or workload or responsibility is found to have expanded, they could qualify for an upgrade involving a pay rise.

Siptu members who work in hospital emergency departments are also seeking similar concessions obtained by the Irish Nurses and Midwives Organisation in negotiations with the HSE earlier this year.

The union also claims low-paid intern staff are due incremental pay rises and has raised with employers issues relating to overtime payments in the Cork/Kerry region.

Siptu health organiser Paul Bell says the union has been trying to progress each of these issues but staff are frustrated because the HSE has been “dragging things out”.

The HSE is obliged to deal with the issues under the Lansdowne Road Agreement, he maintains, adding: “Before we enter public sector talks about a new pay agreement we have to deal with issues arising under the existing agreement.”

Mr Bell says he believes the Department of Health is ultimately responsible for “vetoing” progress on the issues raised by the union.