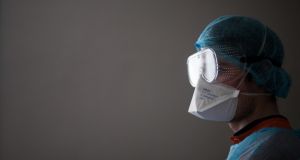 Minister for Finance Paschal Donohoe said that the Government acknowledged that some of the equipment was different that health workers were used to. Photograph: Nathan Laine/Bloomberg

Minister for Finance Paschal Donohoe has said the Government will continue to source alternative personal protection equipment (PPE) for health workers following criticism about the quality of some of the massive consignment imported from China at the weekend.

Mr Donohoe said that the Government acknowledged that some of the equipment was different that health workers were used to.

“It is the case that PPE brought in [will feel to] some health care workers, to be different to the PPE they are used to.

“The HSE has confirmed it is involved in assessing and testing the equipment,” he said. The consignment, said to have cost € 200 million, comprised enough equipment to last 11 years in a non-pandemic environment.

In what was taken as an acceptance that some of the equipment might not be suitable for some workers, he said the Government was continuing to “look at all opportunities to acquire new equipment”.

“We want to ensure that all of our nurses and doctors in primary care centres and those working in homes are protected,” he said.

He said the Government was operating in a situation where PPE was being sought by nearly every country in the world and the purchase of PPE had become “exceptionally competitive”.

Referring to the consignment from China, he said: “Good use will be found for it and we will continue with our efforts to source alternative equipment hat will meet everybody’s need.”

Mr Donohoe was speaking at a Government press briefing on Friday which focused on the arts, culture and language. It was also attended by Minister for Arts Josepha Madigan, Arts Council chairman, Professor Kevin Rafter, and Tanya Banotti, head of Culture Ireland.

Prof Rafter said the Arts Council has decided to release funding of € 1 million as a support to writers, musicians, artists and other creators who will suffer as a result of the crisis. He said that it will give 330 applicants € 3,000 each to create works that can be presented or displayed online. He said an assessment process would occur but that it would be quick.

Ms Banotti also said there was an initiative to fast-track funding for film-makers, writers and creatives in film that will allow up-front funding for scripts, treatments and other preparatory creative work at a time when no filming can happen.

Ms Madigan also announced that at 9pm on Saturday, households across the country will be asked to participate in the “Shine a Light” event, which encourages people to light a light for those with Covid-19, their relatives, for grandparents who are self-isolating and for all the front line workers who are involved in tackling the outbreak.

Asked about the Central Bank’s projection that the economy could deflate by 8 per cent in 2020, Mr Donohoe said it confirmed what everybody already knows about the speed and scale of change.

“Change that even in the darkest of days would have taken a year to happen has now happened over a number of days.”

He said that during the recovery, the pre-Covid issues of homelessness and climate change will not be forgotten.

“As great a challenge as Covid-19 is, it does not replace the social needs that people had before we got into this crisis,” he said.

Asked about the Leaving Certificate and Junior Certificate, he said that the Government’s ability to be clear on the exams was dependent on where it would be with the pandemic situation.

“Getting ready for a State exam in normal circumstances is very demanding and is a cause of great tension for young students.

“We as a Government understand that those feelings are going to be heightened at a time when students are wondering will these exams be happening?

“Our message to those students is: ‘Keep studying, keep doing your work. The Government is going to do its utmost to try and find a way that these exams happen,” he said

In response to questions about the emergence of 38 clusters in nursing homes throughout the State - and a reports of 79 people with coronavirus in one nursing home - Mr Donohoe said it presented a big challenge and was of concern to the government. He said this particular issue had been discussed at Cabinet sub-committee yesterday and was also being discussed by the national expert group on Friday.

“The Government will look at what additional members need to be place to support those who are in nursing homes, but also those who are giving care.

“We are looking at what additional measures need to be put in place,” he said.