Coronavirus: Situation in Ireland ‘misrepresented’ because of limited testing 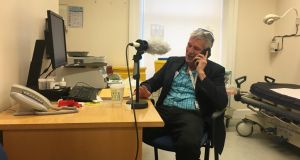 Delays in testing for Covid-19 are leading to patients being treated late and pressures on intensive care, a leading infectious disease consultant has said.

Some patients who have been deteriorating at home for up to a week while waiting for a test have ended up intubated in intensive care units (ICU), said Dr Jack Lambert of the Mater hospital in Dublin.

“I just wonder, if we had caught them three or four days before, when that swab was done and didn’t come back because of the backlog, they might not end up in the ICU,” he told The Irish Times’s Confronting Coronavirus podcast.

“This is a virus that you can be short of breath one day, and you can be intubated the next day and in near death. It’s a very rapid progression of disease of some people, especially the elderly and immunocompromised, and that’s scary. This is something that none of us clinicians have ever seen before.”

The scope of the epidemic in Ireland was being “misrepresented” by a reliance on figures based on limited testing, Dr Lambert said.

“How can you talk about flattening the curve where you’re testing such small numbers of people and people are queuing up to get testing?”

“And then there’s results that are pending for a week, so the numbers represent our lack of supplies for testing rather than flattening the curve.”

Upscaling of testing was urgently needed in order to flatten the curve, he said. “And then as soon as those test results are available, which should be in 24 hours, you contact trace everyone who has had a significant exposure.”

“South Korea and Singapore and many of the other countries have been able to flatten the curve didn’t do it just by putting people in isolation and reporting numbers. They did it by testing and very strict contact tracing. That’s what we need to be doing.”

Dr Lambert said a “master plan” was needed in order to “win the war” on coronavirus.

“You can’t fight one battle more than another battle. You have to have a master plan and fight all of the battles in parallel. The testing plan. The shutdown plan. The contact tracing plan. The community plan, as so on.”

Dr Lambert said that while Ireland is “way ahead” of other European countries, and “ahead of the game” in some respects, actions in some situations were being taken “a day too late”.

Meanwhile, emergency medicine consultants believe the expected surge in critically infected patients requiring places in ICU could hit Irish hospitals swiftly based on the experiences of hospitals in London and Italy.

She said the experience in Italy was of cases coming “like a wave”.

“It was like nothing they had ever seen before. That’s how quickly a surge can happen,” said Dr Motherway, though she added that medics in Italy did not know Covid-19 was in the community for some time. “They saw a few patients with respiratory failure and then a few more and then it happened and it happened very quickly.”

Dr Motherway said one Dublin hospital, running at twice its normal capacity, experienced a surge in critically ill patients requiring ICU beds earlier this week, but managed the surge by transferring affected patients elsewhere by ambulance. She said this scenario had been managed “very appropriately and we are still in a place where we can do that”.

Dr Emily O’Conor, president of the Irish Association for Emergency Medicine, said that ICU beds would fill up quickly when the Covid-19 surge hits the health system.

“When a hospital experiences a surge, it is inclined to happen very quickly; it is a patient suffering respiratory failure followed by another followed by another,” said Dr O’Connor, an emergency medicine consultant at Connolly Hospital in Blanchardstown, Dublin.

“It is trying to pace the curve and reduce the amount of people who get sick. We are hoping that it is not happening very quickly. We are still planning for those scenarios.”

Dr O’Connor said that Letterkenny Hospital in Co Donegal “went through a difficult period” at one point and that Beaumont Hospital in Dublin and Limerick “have been under significant pressure on their ICU capacity”.

“That is still happening. It is as the capacity gets full that it is going to be more difficult,” she said.

1 Woman stranded in Ireland due to pandemic has ‘miracle baby’
2 Transmission of Covid-19 on flight into Ireland linked to 59 infections
3 Australia demands answers after women taken from Qatar Airways flight and strip-searched
4 US election: ‘Donald Trump needs to go. White America got what they want’
5 Covid-19: Public urged to ‘stay at home’ as 1,025 further cases confirmed in State
Real news has value SUBSCRIBE