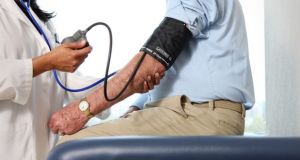 Hospital consultants in fulltime practice in private hospitals are being advised by their representative body not to sign up to work in public hospitals. Photograph: Getty.

Hospital consultants in fulltime practice in private hospitals are being advised by their representative body not to sign up at present to the Government’s new initiative for them to work in the public system during the current Covid-19 crisis.

The Irish Hospital Consultants Association (IHCA) said on Friday that there were “a large number of significant issues” concerning proposed new State contracts for these consultants that needed to be clarified.

It said it could not advise members to sign such new contracts until these issues were addressed.

The Government on Monday announced it had agreed the heads of a deal to effectively take over 19 private hospitals around the country for a three-month period to provide additional capacity to deal with the Covid-19 pandemic.

As part of this initiative consultants working fulltime in private hospitals were to be offered locum contracts - known technically as category A contracts -to work exclusively in the public system. They would paid on a scale ranging from €141,000 to €195,000.

However the Department of Health subsequently briefed medical organisations and health insurers on Wednesday that while there would be no private work in private hospitals, consultants with contractual rights to see fee-paying patients in public hospitals could continue to do so as long as they did not have Covid 19.

Public hospitals could also bill insurers for accommodating non Covid-19 patients who opted to use their private insurance.

This revelation led to strong concern among some private hospitals who have now sought clarification from the HSE on the issue.

In a memo to members on Friday the general secretary of the IHCA Matin Varley said:

“Despite agreements on Wednesday, senior health service management has failed to provide the IHCA working group with a draft template of the temporary contract to be offered to whole-time private practice consultants (WTPP) and arrangements for other consultants. It was agreed the draft template contract would be provided for assessment and further discussions prior to it being issued to consultants, with a view to finalising it when all outstanding matters were resolved.

“A large number of very significant issues concerning these contracts and practice terms for all consultants have not been clarified despite them being discussed in a meeting on Wednesday and commitments having being entered into by the health service management with the IHCA.

“This is unacceptable given the commitments provided at our meeting and accordingly the IHCA is advising private practice consultants that we cannot recommend that you sign any contract provided to you until the outstanding matters are clarified and the IHCA provides you with a further update.”