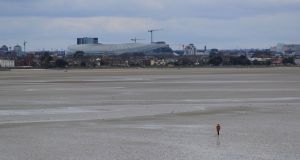 Social Isolation: A walker on the strand with the Aviva Stadium in the background. Photograph: Nick Bradshaw/The Irish Times.

Access to many of Dublin’s beauty spots has had to be barred by Dublin City Council following Garda concerns over the public’s observance of new Coronavirus restrictions.

Last Friday the Government ordered that people could continue to take “brief” physical exercise, but only within 2km of their homes.

While most parks remain open, the city council has in recent days had to introduce additional limits and prohibitions, in particular to stop people from driving to parks and beaches.

From Thursday following a Garda instruction, the council has closed the Causeway Road leading to Bull Island and Dollymount Beach, banning cars from parking along the 1.5km road. It also closed the “dog park” in nearby St Anne’s Park in Raheny, again on the instructions of the Garda.

On Monday, just days after the 2km restriction came into place, the Garda asked the council to close the car parks on Strand Road, Sandymount, in Dublin 4. The council had already on Saturday, in line with all other local authorities, closed the car parks associated with public parks to ensure only those living locally used the facilities.

The council also last Saturday closed all access to Merrion Square, again following Garda concerns over crowding, but the park has since reopened for those with 2km to use.

“We need people to stay within 2km of where they live for exercise, and to facilitate that and to ensure local people have the space to maintain social distancing, the gardaí asked us to put in place some closures, such as the closure of the Causeway, to stop people from travelling from further away than the 2km.”

The dog park in St Anne’s Park was closed because Garda advised it was “too confined” for the number of people using it Mr Shakespeare said, while the car parks in Sandymount were closed because the council “treats Sandymount Strand as a park” he said.

From 4pm on Friday, the council will close its community allotments in St Anne’s Park and at Meakstown in Ballymun. Dun Laoghaire Rathdown County Council is also closing its allotments this evening.

Fingal County Council had closed its allotments earlier this week. It said it had sought Government and public health direction on matter and was informed there was “no exemption for allotments” in the orders issued last Friday.

“These measures have been introduced to protect our communities and particularly older people and those who are medically vulnerable, by slowing the spread of the virus,” it said.