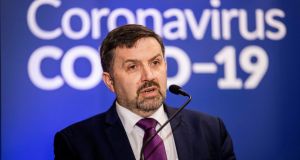 First Minister Arlene Foster has given her backing to the North’s health minister, Robin Swann, over his handling of the coronavirus crisis after Deputy First Minister Michelle O’Neill said he had been “too slow to act”.

Asked on BBC Radio Ulster’s Good Morning Ulster programme on Friday if she had confidence in Mr Swann, Ms Foster replied, “yes, I do.”

“I have to support all of my ministers because that is what we need to do at this very difficult time for us all,” she said. “We have to collectively work together to make sure we put our best foot forward for all the people of Northern Ireland.

“We are coming forward as a five party Executive, and I as the First Minister have a leadership role in that and I am trying to pull people together. I speak to all of the ministers and pull us all together,” said the DUP leader.

To the people in Northern Ireland, she said, “we will continue to work together, they have my commitment.”

There have been continuing tensions in the Executive over the approach to tackling coronavirus, with Ms O’Neill repeatedly stating during their daily joint press conferences that she has concerns over the approach being followed in Northern Ireland, in particular in regard to testing.

About 500 people per day are being tested in Northern Ireland, with a target of 1,100.

On Thursday Mr Swann acknowledged the frustration among health service staff and the public over testing and the availability of personal protective equipment (PPE).

He said both issues were “receiving absolute priority” and staff testing numbers were being expanded as quickly as possible.

“I fully understand the frustration that we have not been able to scale up testing numbers more quickly,” he said.

“This is not down to a lack of will or action. There are significant challenges including laboratory and staffing capacity and the unprecedented levels of global demand for testing reagents and swabs.”

Asked on the BBC’s The View on Thursday night if she had confidence in Mr Swann, the Deputy First Minister and Northern leader of Sinn Féin replied: “We’re in the middle of a pandemic, and I think that we have to continue to work together.

“I will continue to work with Robin, I think he has been too slow to act,” she said, adding “this is not a time for calling for anybody’s head or any of those things.”

Ms O’Neill said she did not “for one second” doubt Mr Swann’s motivation, and that he “wants to save every life he can”.

But she said that while she wanted “unity in the Executive” and to be able “to stand up on a platform with my fellow colleagues on the Executive in a united front”, she was sure “the public would much prefer that I try and shape things into the way they should be, which is to follow the WHO’s advice, which is to do more testing.”

She said it was “not easy to call things whenever you think something’s wrong, but this is far too serious” and it was “not about party politics.

“Unfortunately everything in the north of Ireland is seen through the prism of orange and green or Dublin versus London or those things, this is not about that.”

Ms Foster said this was “not a time for party politics” and politicians had to work together “whatever our differences of opinion are to do what is right for everybody.

Asked if Ms O’Neill was right to be taking such an approach on a public platform, Ms Foster said it was “a matter for her as to how she goes forward” but they were in a joint office and “we will continue to work together, as I will continue to work with the other parties in the Executive find a way forward in this hugely difficult time.”

This was, she said, “not about London or Dublin, it’s about saving lives, and that’s what we will focus on.”

Mr Swann’s party leader in the Ulster Unionist Party, Steve Aiken, said his party colleague and health service staff had been “responding magnificently” to the “unprecedented challenge” of coronavirus.

“It is regrettable but not unexpected that the deputy first minister & Sinn Féin continue to seek to gain political advantage rather than joining together with the rest of the Executive’s political parties to do what is best for us all.

“It is well beyond time that Sinn Féin got the message and started working cooperatively for us all,” he said.

Garda detective sent forward for trial on charges including threat to kill ex-wife 15:43
Six counties register no coronavirus case over past week 15:26
First ever woman president of an Irish university appointed at University of Limerick 14:58
Varadkar accused of naivety over ‘Covid penalty’ on mortgage holders 14:26
Learner drivers could be forced to take driving lessons to renew permits 13:20

1 US supreme court rules grand jury can obtain Donald Trump’s financial records
2 Donald Trump is an amateur populist – the real trouble is yet to come
3 Mother and five children sleeping in car while seeking accommodation
4 Six counties register no coronavirus case over past week
5 Covid-19: Small minority of pubs putting health of customers and staff ‘at risk’
Real news has value SUBSCRIBE