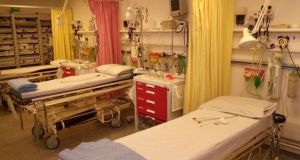 The number of flu deaths this winter has risen to 28, but the worst of the current outbreak may be over, according to the Health Service Executive.

Partly as a consequence, HSE officials are hopeful hospital overcrowding may also have peaked following this week’s record trolley numbers.

Flu levels fell last week for the first time since the outbreak began at the end of November but are still very high, the HSE said in its weekly briefing on Thursday. And while the flu season began earlier than usual this winter, it may also be finishing earlier, officials say.

In addition, the season may be up to three weeks shorter than usual, unless there is a significant increase in cases of influenza B coming from North America - virtually all cases up to last week involved the A strain of the virus.

The decline in cases is most marked among children, thus easing the pressure on children’s hospitals, but cases involving over-75s increased again last week.

Flu accounted for 662 admissions last week, and a total of 2,038 this winter to date. Of the 72 patients put into intensive care, 60 per cent were aged 65 or over. This age group also accounted for 80 per cent of the 28 deaths.

HSE assistant national director Dr Kevin Kelleher described as “perturbing” the fact that 79 outbreaks have been recorded so far this winter out of a total of 90. Despite an increase in the number of healthcare staff getting the flu vaccine in recent years, the uptake rate was still not high enough to prevent many outbreaks, he said.

Despite this week’s problems, officials said they were encouraged by how quickly trolley numbers have fallen since the records set earlier in the week. “Activity is now at the higher end of normal rather than anything exceptional. We wouldn’t have expected to see that drop,” said HSE chief operations officer Anne O’Connor.

“We hope the worst is over but we can’t be say this for sure,” she added.

Scheduled activity such as elective surgery is still curtailed at most hospitals due to the emergency department overcrowding, and decisions to resume normal service will be made at a local level, officials said.

1 Eyewitness to Auschwitz: ‘We were held in the wagons like animals’
2 Chinese virus-hit city of Wuhan closes transport networks
3 Eating out in Dublin – the homeless way
4 Election 2020: 10 key questions to ask candidates on your doorstep
5 Woman’s body most likely dismembered with power tool – murder trial
Real news has value SUBSCRIBE