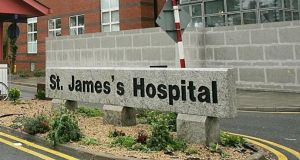 A Fianna Fáil TD said he was shocked to witness the ‘intolerable’ abuse and aggression faced by staff in St James’s Hospital in Dublin. Photograph: The Irish Times

Abusive and aggressive behaviour towards nursing staff in hospitals has become an “expected” part of the job, the country’s largest organisation for nurses and midwives has said.

On Monday, Fianna Fáil TD Eugene Murphy said he was shocked to witness the “intolerable” abuse and aggression faced by staff in St James’s Hospital in Dublin.

The Roscommon-Galway TD, who spent a night in the hospital for a minor health issue earlier this year, said some people attending the emergency department were verbally and physically aggressive towards workers.

In the first six months of 2019, there were 279 assaults on staff in HSE hospitals, with almost 250 of those being perpetrated on nurses or midwives, according to HSE figures.

In 2018, some 948 assaults on HSE hospital staff were reported, with 584 relating to nurses or midwives.

These statistics also do not include voluntary hospitals, meaning the true number of hospital staff facing abuse is likely to be much higher.

“Many of our members simply don’t have time to file a report on assaults they’ve faced at work, so we know that official figures underestimate the scale of the problem,” Mr Fitzpatrick said.

“From the figures we do have, between 60 and 90 per cent of assaults are on nurses. It’s sadly become an expected part of the job, but that has to change.”

“We know that alcohol and addiction can be key causes of abusive behaviour in Ireland’s hospitals - particularly in emergency departments. But it’s also driven by frustration over long waits, overcrowding and understaffing. It combines to form a pressure-cooker environment,” he added.

He said that the INMO “fully expects” employers to operate a zero-tolerance policy and prosecute offenders.

“But we also need to get proper staffing in place and reduce overcrowding: a properly resourced health service would also be a calmer, safer place to work and receive care,” he added.

Speaking previously about the issue, Nicholas Parkinson, head of national health and safety function at the HSE, said ensuring the safety of staff and service users was a “priority” for the health service.

“There is an emphasis on training and equipping the workforce effectively with skills on risk identification and the management of violence and aggression,” he added.