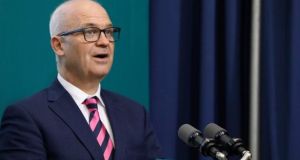 Chief Medical Officer Dr Tony Holohan, who has been on leave, is expected to return to his post next week.

Sources confirmed that Dr Holohan, who stepped down in July for family reasons, will return to his role next Monday.

Dr Holohan said he was stepping back to spend time with his family and to help care for his wife who has been diagnosed with terminal cancer. She is understood to be receiving continuing care.

Dr Holohan became as well-known figure in the first half of the year, fronting nightly briefings from the National Public Health Emergency Team (NPHET) during the early phase of the virus and the national lockdown.

He was seen as a “hawk” on the lockdown, advocating tough restrictions and advocating caution on the pace of reopening the country during the early summer. Sources say that his return will strengthen the argument for tougher restrictions to be introduced to combat the resurgence of the virus in recent weeks.

NPHET meets on Thursday to consider the latest developments in the spread of the virus and is expected to consider extending the level three restrictions to several more counties. If further restrictions are requested by the group, there will be a meeting of senior officials later followed by a cabinet committee meeting tomorrow, and potentially another meeting of the full cabinet later.

However, sources familiar with informal discussions in recent days say they do not expect the extension of further restrictions tomorrow, as officials want to evaluate how the restrictions in Dublin and Donegal, and intensified public awareness messaging by public health authorities since last week, are working.

A further 429 confirmed cases of Covid-19 were reported by the National Public Health Emergency Team (NPHET) on Wednesday. This brings to 36,155 the total number of cases of the disease in the Republic.

Some 189 of the new cases are in Dublin, and 60 in Cork. There were also 31 cases in Donegal, 28 in Galway, 18 in Kildare, 15 in Wicklow, 15 in Clare, 12 in Limerick, nine in Meath, nine in Louth, seven in Cavan, seven in Longford, six in Laois, five in Offaly, five in Westmeath, with the remaining 14 cases in eight counties.

One further death was reported to NPHET, bringing the total number of deaths to 1,804.