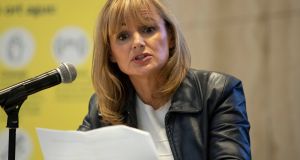 A case of how one couple’s weekend away resulted in 30 cases was among the examples of recent clusters outlined by the National Public Health Emergency Team (NPHET) on Wednesday.

Dr Breda Smyth of Director of Public Health at HSE West cited a cluster of 30 cases which arose after a young couple went away for a weekend and attended a house party. This resulted in six to eight cases, and cases in three to four households. On the second day of their trip, they went with friends to a town centre, resulting in four more cases.

The pair attended a bar, where six people at an adjacent table, and four staff, tested positive. They then went on to a “drinks venue”, where four more cases occurred.

It demonstrates how fast #COVID19 spread between people over the course of one weekend - and how important it is to stay home if you're unwell or a close contact of a case.

Make a plan today to limit your social contacts. pic.twitter.com/KtL3965bLP

In another cluster of 24 cases involving intergenerational social mixing, the outbreak started in a small rural place where middle-aged people had gathered. There was socialising in a pub and workplace and further transmission occurred in the pub over the weekend.

Fourteen of the cases were directly linked to socialising and 11 involved people aged between 45 and 70. In the outbreak, there were three family clusters, three schools were affected and also one workplace.

A third example arose from two student parties on the same night. There was mixing between the parties, leading to 21 cases among those in attendance. One of these people then had dinner with a university friend, who later went to class. Later 15 out of 26 people in the class tested positive, giving 36 cases in total. The students were masked and observed social distancing, but public health officials believe transmission occurred during break-time.

Speaking at a press briefing on Wednesday, acting chief medical officer Dr Ronan Glynn again urged people to halve their social contacts. “Reducing the number of people that we meet - and engaging safely with a small core group - remains the cornerstone of our collective effort to reduce the spread of this virus and its impact on our health and the health of the people that we care about,” he said.