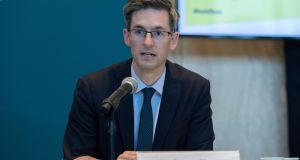 Dr Ronan Glynn, the acting chief medical officer, appealed to those identified as close contacts of confirmed cases to avoid meeting up with other people, going to work or taking part in sporting activity. Photograph: Colin Keegan/Collins.

A further 363 cases of Covid-19, including 154 in Dublin, have been reported to the National Public Health Emergency Team (NPHET).

One further death from the disease has been confirmed, with the total now at 1,803.

Figures published on Tuesday evening show there have been 35,740 cases of the disease in the State, with the first was confirmed seven months ago on February 29th.

NPHET said 64 per cent of those who tested positive were aged under 45 and that 47 per cent were linked to outbreaks or close contact with a confirmed case. It said 58 cases were identified as being caused by community transmission.

Dr Ronan Glynn, the acting chief medical officer, appealed to those identified as close contacts of confirmed cases to avoid meeting up with other people, going to work or taking part in sporting activity.

“I know that these are difficult choices for people to make, but each individual effort will make a significant impact on the spread of this disease and, ultimately, on the numbers of deaths that we can prevent this winter,” he said in a statement.

NPHET officials are to attend Wednesday’s meeting of the Oireachtas special committee on Covid-19 alongside Minister for Health Stephen Donnelly, the Department of Health said on Tuesday night.

Committee chairman Michael McNamara had criticised the decision of NPHET officials not to attend the meeting but in a change of heart the department said Dr Glynn, Prof Philip Nolan and Dr Cillian de Gascun would now be attending the meeting.

Separate data show the number of new Covid-19 cases being confirmed continues to rise, with the 14-day incidence increasing to 88.3 cases per 100,000 of population yesterday, compared to 84.5 on Sunday.

Incidence figures were up in 16 counties, down in five and unchanged in five, according to the latest epidemiological report from the Health Protection Surveillance Centre (HPSC).

Donegal, with an incidence of 191, and Dublin, on 160.3, remain Covid-19 hotspots still with rising case numbers, while Monaghan recorded the biggest single daily increase.

In the week up to September 19th, 391 outbreaks were reported in family homes, and 18 in workplaces and 11 among extended family, according to HPSC figures.

There were also 11 outbreaks involving children in schools, but this does not mean transmission within the school has been established, the HPSC says.

There were four outbreaks in nursing homes and childcare facilities, three that were travel related or in restaurants/cafes and two in retail outlets, pubs and hospitals.

Of the 18 outbreaks in workplaces, just three were in meat or fish processing plants.

No new outbreaks were reported in at-risk settings, including Roma, travellers, direct provision centres, prisons and the homeless.

Meanwhile, health staff have been told to wear masks when passing through busy areas of hospitals and other healthcare facilities, in addition to when they are in contact with patients.

The change in advice to healthcare workers follows expressions of concern from the public and patients over staff not wearing masks at times in health facilities.

Official guidance has yet to be updated but the change is referred to in new infection guidance and control advice for residential care facilities.

To address public concerns, HSE infection control specialists have recommended “healthcare workers should be asked to wear masks when transiting through busy public areas of healthcare facilities in both the community and acute setting,” it says. This is in addition to an existing rule requiring the wearing of masks for all clinical contacts.

Residents should not be asked to wear masks all the time “but there may be times when they should wear them if they can tolerate the mask”.

Although visits by the public to patients are currently restricted in Level 2 areas and suspended in Level 3 areas, the guidance makes clear that “window visits”, where a person stands outside a home and speak to a resident at a safe distance through an open window or by telephone, is acceptable at any level and during outbreaks.

According to the newly published document, there have been “several cases” of hospital-acquired infection in each of the last four weeks, compared to “almost none” in the previous 10 weeks.

There has also been an increase in patients with Covid-19 admitted from the community to residential care facilities, and an increase in outbreaks in nursing homes.

1 Nearly 400 Brazilians have tested positive for Covid-19 in Ireland, data shows
2 Covid-19: Pressure over breakdown in tracing system intensifies as State enters Level 5
3 One hundred Irish retailers for all your online Christmas shopping
4 Life under Level 5: Where can I go, who can I see, what is closed?
5 Des Bishop apologises to Traveller community for comments in interview
Real news has value SUBSCRIBE