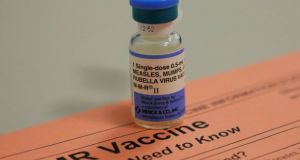 The MMR vaccine protects against measles, mumps and rubella. The first dose is given at 12 months of age and the second at four to five years. File photograph: Brian Snyder/Reuters.

More than 1,000 new cases of mumps were recorded in the first six weeks of the year, in the latest surge in a year-long outbreak of the disease.

The 1,020 cases notified to the HSE’s Health Protection Surveillance Centre is almost twice the number of mumps cases that occurred in the whole of 2018.

The biggest outbreak in a decade has continued despite the HSE offering young people a free dose of the MMR vaccine in an attempt to contain it.

With the outbreak mostly affecting teenagers and young people in their twenties, hundreds of cases have been reported on third-level campuses and dozens of schools have also been affected.

The Health Service Executive (HSE) has urged anyone aged between 11 and 30 who has not had two doses of the vaccine, or who is unsure of their vaccine status, to avail of the offer due to a “significant” rise in cases of the virus.

The MMR vaccine protects against measles, mumps and rubella. The first dose is given at 12 months of age and the second at four to five years.

Although most cases have involved unvaccinated people, waning immunity has also played a role.

Mumps is a highly infectious and dangerous illness that spreads very easily, particularly in homes, crèches, playgroups, camps, schools and universities. It can be a serious illness and can have life-changing repercussions in some instances.

The current uptake of the vaccine is 91 per cent by 24 months, which is good by international standards but below the target of 95 per cent needed to prevent measles outbreaks.