Chief medical officer Dr Tony Holohan says he is stepping back from the post to spend time with his wife, who has terminal cancer, and children. 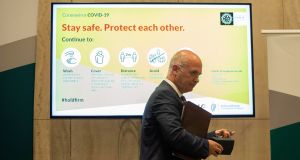 Dr Tony Holohan, the Department of Health’s chief medical officer, is pictured this evening after announcing he is stepping back from his role to care for his wife and spend time with his family. Photograph: Colin Keegan/Collins.

Chief medical officer Dr Tony Holohan has said he is stepping back from the post to spend time with his wife, who has terminal cancer, and children.

Dr Holohan has led the public health response to the Covid-19 crisis. He said his wife Emer Feely, who is also a doctor, was diagnosed with a form of blood cancer called multiple myeloma in 2012.

“She has had a number of difficult years with her disease and was admitted for palliative care last Saturday,” he said at Thursday night’s briefing by the National Public Health Emergency Team (NPHET), which he chairs.

“From now on I want to give my energy, attention and all of my time to Emer and to our two teenage children, Clodagh and Ronan.”

He said he informed Taoiseach Micheál Martin and Minister for Health Stephen Donnelly on Thursday. A plan has been put in place for others to take over different aspects of his responsibilities, he said.

“As a husband and father, and as a public health doctor, I am conscious that we have been through tough times together over the last number of months and many families across the country have been affected by the course of Covid-19, suffering pain and the loss of loved ones,” said Dr Holohan. “I hope that we can all remain working together to continue to stay vigilant.”

He thanked everyone for their support and asked that his family’s privacy be respected.

Dr Holohan has been in his position for the last 12 years, but has never been more prominent in the public eye than since the onset of the Covid-19 crisis.

Mr Martin offered his thanks to Dr Holohan for “helping to guide this country through the Covid-19 emergency”.

“His work, experience and briefings helped people to understand the gravity of the situation facing us, while his calmness reassured us that if we followed the guidelines and advice we would overcome these great challenges together,” he said.

“Every home in Ireland has come to know Dr Tony Holohan. His leadership during the pandemic has given us all confidence that the decisions being made are based on solid public health advice. As a country we owe him and his family a great debt of gratitude.”

Mr Donnelly thanked Dr Holohan for his leadership and his “extraordinary commitment and professonialism” during the pandemic.

“He has been a rock, and he will be back as a rock,” he said, adding that Nphet had worked “night and day” and had “brought us to where where we are” under Dr Holohan’s leadership.

The public health emergency team on Thursday reported a further five deaths and 15 cases of Covid-19 in the State. A total of 1,738 people have died of the disease since the pandemic began and 25,489 cases have been confirmed.

NPHET expressed concern about an increase in recent days in the level of transmission of Covid-19 in the community.

The reproduction number for the disease, which measures how many other people a confirmed case goes on to infect, has increased to “close to one” according to an estimate, Prof Philip Nolan said.

Earlier, Northern Ireland’s Department of Health reported one more Covid-19 death, bringing the total since the pandemic began to 552.

The department also said seven additional cases of the disease had been confirmed, taking the total to 5,768. A total of 113,283 people have been tested for the disease in Northern Ireland to date.

The latest assessment by the European Centre for Disease Control finds that the State has the lowest current incidence of Covid-19 cases in western Europe.

Mr Donnelly said public health officials were “very concerned” that increased international travel will lead to a second wave of coronavirus in Ireland.

The Fianna Fáil TD said the Covid-19 pandemic internationally has become “quite volatile” with just over one million of the 10 million cases being recorded in the past week with a big increase in infections in France, Portugal and Spain in the last two weeks.

Foreign travel now accounts for 17 per cent of new cases, an increase from about 2 per cent of cases in recent weeks, he said.