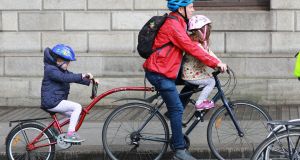 Motoring and bike retailer Halfords said profits for the first half of the year would be higher thanks to the new enthusiasm for cycling prompted by the pandemic. Photograph: Nick Bradshaw

Motoring and bike retailer Halfords said profits for the first half of the year would be higher thanks to the new enthusiasm for cycling prompted by the pandemic.

In the five weeks to September 25th, same-store sales grew 22 per cent, with cycling sales up 46 per cent. As a result, pre-tax profit for the first half of its financial year will be “in excess of £55 million”, Halfords said.

That compares with £35 million-£40 million it forecast just a few weeks ago, and double the £27.5 million it made in the same period last year.

Shares in the retailer, which has 24 retail outlets in the Republic, rose nearly 20 per cent to 217p on the news.

The rates of increase in cycling sales are slower than they were over the summer, but higher than the company or the market had expected given the end of the summer holiday season and the return of children to schools.

It is the second time that the company has upgraded guidance for the first half.

Investec analyst Kate Calvert said the profit upgrade meant the company was likely to finish the year with very little debt, clearing the way for Halfords to resume paying dividends in the next financial year.

For the year to April 2021, Ms Calvert is now forecasting full-year underlying pre-tax profit of £72.5 million, up from a previous estimate of £46.7 million and ahead of the £52.6 million the company reported last year.

However, she warned that Covid-19 – which has deterred many people from using public transport – may have brought bicycle sales forward from next summer.

Motoring sales in the group’s 400 stores rose a more modest 7.5 per cent, while same-store sales at its Autocentres car servicing business increased 18 per cent and there was “exceptional demand” for its “Mobile Expert” service, which dispatches technicians to customers’ homes.

Halfords has benefited from the diversion of spending from holidays, a reluctance to take public transport during the pandemic and the launch of government voucher schemes to promote bike use.

But it reiterated previous warnings about the uncertainty posed by potential second waves of Covid-19, the end to the furlough scheme in the UK and the outcome of Brexit negotiations. “We remain cautious in our outlook for the second half,” it concluded. – Copyright The Financial Times Limited 2020