Do you park on footpaths? Disability campaigners would like a word 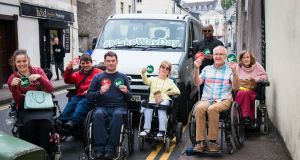 “Doing Pana”, or walking down Patrick Street, is something generations of Corkonians have enjoyed, but for one woman, such a simple pleasure is no longer possible due to the obstacles she finds in her way.

Denise Higgins has spina bifida, which affects her balance, and she no longer goes to Cork city centre due to the number of obstacles she would encounter en route.

“A street may look perfectly safe to you but it could be lethal for me due to issues I have with balance. Any obstacle on the street puts me in danger of a fall, and I’ve fallen many times,” said Ms Higgins.

“I’ve fallen so many times that I no longer go into Cork city centre. I live and work in the suburbs but surely, I should be able to ‘do Pana’ like everyone else,” said the Douglas resident.

Ms Higgins’s story is just one of many highlighted by the Disability Federation of Ireland to mark Make Way Day aimed at making people more aware of the obstacles they can often unwittingly place on streets.

Disability campaigner and UCC student Paul Cudmore, who has cerebral palsy, outlines the predicament he often finds himself facing as a wheelchair user.

As #MakeWayDay campaigners we know that most people’s heart is in the right place. Most obstacles are due to lack of awareness. Parking on the footpath is the top blocker and we’ve enlisted the support of Assistant Commissioner Dave Sheahan of @GardaTraffic https://t.co/ClbInNGC96 pic.twitter.com/4hTlXJ4dTI

“The dipping in the footpath is something many of you may never have noticed, but for me it’s my entry and exit to the footpath and the wider world. If a car or something else blocks it, I’m stranded, stuck,” he said.

“My choices here are: stay stranded on the footpath, or try and get off it and into traffic. Either way I’m putting myself in danger having to use the road or tip out of my chair.

“And it’s all because someone has thoughtlessly blocked the dipping in the path, someone who doesn’t even know a path has a dip. So think twice,” he says.

Some 25 local authorities are backing the campaign as they hit the streets to remind members of the public of a few simple rules: don’t park on the footpaths, don’t forget bins and don’t park bikes carelessly on the street.

Also backing the MakeWayDay campaign, which is now in its third year, is the Garda roads policing unit headed up by Assistant Commissioner Dave Sheahan.

Make Way Day is a chance for everyone to reflect on the needs of people with disabilities in our communities and how, by making small changes to their behaviour, they can make roads and streets safer for everyone, he said.

“Someone in a powered wheelchair has to either go home or risk their lives on the public road to get around a parked vehicle on a path. Neither outcome is acceptable to the gardaí.

“The Garda Roads Division will increase their vigilance and lower their tolerance of footpath parking for all 365 days of the year in support of the campaign,” he said.

Disability Federation spokeswoman Clare Cronin welcomed the support of An Garda Síochána and the growing number of local authorities backing the campaign as the federation continues to persuade people to change their parking behaviour.

“Our vision is an Ireland where it’s as socially unacceptable to park on the footpath as is it to smoke indoors – once people are aware of the huge problems they cause people with disabilities, we find they’re willing to change.”