Lung cancer: Under half of patients seen on time in major hospital 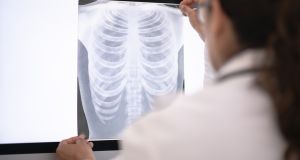 Less than half of patients urgently requiring lung cancer appointments at the largest hospital in the midwest are being seen on time.

The University of Limerick Hospitals Group has blamed the delays on a rise in new patients attending its rapid access clinic.

Lung cancer is often diagnosed late and has poor prognosis, so early detection is vital in order to maximise treatment options and improve outcomes.

A Lancet study published last week found five-year survival rates for lung cancer in Ireland have doubled over the past 20 years, but are still under 20 per cent.

Last month, HSE chief executive Paul Reid told the board of the health authority seven of the eight cancer centres around the country were compliant with these targets but that “one hospital was challenged to match referrals with available capacity”.

The HSE later confirmed University Hospital Limerick has faced “challenges” in 2018 and 2019 as capacity at its clinic was not adequate for the number of referrals.