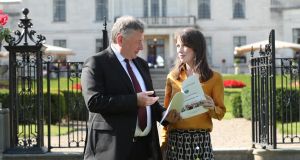 The acute hospital system across the country is crumbling, hospital consultants have claimed at their annual conference.

The Irish Hospital Consultants Association (IHCA) meeting heard on Saturday that there were over one million people on waiting lists and even straightforward new services could not be opened fully due to shortages of doctors.

“Blood (samples) have to be taken by taxi from Blanchardstown to Temple Street (for analysis). The turn around time is up to three and a half hours.

“That is not an appropriate way to run a service,” he said.

Separately, a senior consultant warned the Irish health system could face an “absolutely horrendous” experience this coming winter if the affects of a serious flu were added to existing problems.

IHCA vice president Dr Laura Durcan said Ireland could be hit by an “Aussie flu” which has been circulating in the southern hemisphere.

She said the flu in Australia and New Zealand was of a catastrophic, life threatening type that Ireland had not experienced over the last year or so.

She said in Australia intensive care facilities were full.

Dr Durcan said flu generally increased after November and it was particularly worrying that the health service in Ireland was already at maximum capacity in September when the weather was mild and there was no snow or ice.

“If we are tight in September there is no way that come November, December and January that things are not going to be horrendous.”

Dr Durcan told the conference that the Irish health service was approaching a crucial tipping point.

“We either accept the status quo that things are going to continue to get worse or we rally. We accept that the service at the moment is being run on the good will of too few people and that good Will is starting to wear thin.”

She said the Minister should look at the amount of money being spent on expensive locums provided through agencies to fill gaps “ and acknowledge that we are wasting money”.

“This is money that should be spent on getting our permanent posts filled.”

Meanwhile, Fianna Fáil has pledged to end the two-tier pay system for hospital consultants appointed since 2012 if it leads the next government.

The party’ s health spokesman Stephen Donnelly told the IHCA conference on Saturday that ending pay inequality for senior medical specialists was one of the conditions necessary to reduce waiting lists and “to bring our young doctors abroad back home”.

He estimated that in the first year providing equal pay for recent-appointed consultants would cost €20million to €30million.

She said this could pay for itself by reducing expenditure on expensive agency personnel.

Minister for Health Simon Harris pulled out of attending the IHCA conference on Friday citing a clash of diary commitments.

The Department of Health said on Friday that Minister of State Jim Daly would stand in for Mr Harris.

Mr Donnelly said the reason Fine Gael did not declare a national emergency over health given that there were now 1.1 million people waiting for treatment was “the people it’s senior people have dinner with all have private health insurance “.

IHCA president Dr Donal O’Hanlon told the conference that one-in-five consultant posts were now filled on a temporary basis due to the two-tier pay system in place.

Mr Donnelly said ending the two-tier system of pay for consultants was one of Fianna Fáil priorities in talks with the Government on the forthcoming budget. He said the party would use what leverage it had.

He said the resistance from Government last year in the talks leading up to the budget to dealing with the consultants pay issue was “absolute”.

Mr Harris had said he would invite medical organizations to talks on ending the existing pay arrangements in the month of September. However no date has yet been set for these discussions.

The Department of Health said on Friday it still aimed to invite medical bodies to talks on pay in September.