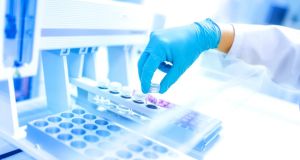 The research says there is a need to improve the design, conduct, analysis and reporting of such trials. Photograph: iStock

Almost half of cancer drug trials supporting new treatments over a three year period had a high risk of bias that may show effects were exaggerated, a new study has found.

The research published today in the British Medical Journal claims European trials between 2014 and 2016 support other research that raises “serious concerns about low standards of evidence supporting new cancer drugs”.

It also says there is a need to improve the design, conduct, analysis and reporting of such trials.

In 2017, more than a quarter (24 of 92) of European Medicines Agency approvals were for cancer drugs, mostly based on evidence from randomised controlled trials. These are considered the “gold standard” for evaluating treatment effectiveness.

“However, flaws in the design, conduct, analysis, or reporting of randomised controlled trials can distort estimates of treatment effect, potentially jeopardising the validity of their findings.”

In evaluating such flaws, international researches looked at the bias risk and reporting of randomised trials over the three year period.

In that time the EMA approved 32 new drugs on the basis of 54 studies, of which 41 (76 per cent) were randomised controlled trials.

Only 10 (26 per cent) measured overall survival as a main or primary endpoint. The other 29 trials (74 per cent) examined the indirect measure of benefit, which do not necessarily predict whether or not a patient will live longer or have a better quality of life.

“Overall, 19 trials (49 per cent) were judged to be at high risk of bias because of deficits in their design, conduct, or analysis. Trials that evaluated overall survival were at lower risk of bias,” a summary of the work said.

However, Irish cancer specialists point out that research and treatment is a very complex area and, generally, survival rates are improving.

Professor John Crown, consultant medical oncologist, said there was a need to rethink the design of drug trials in a modern molecular era.

“I don’t perceive a problem with dangerous drugs being prematurely approved,” he said. “I think the (regulatory) agencies are pretty rigorous about it. Cancer (treatment) has been a great news story in recent years - early stage breast cancer improvements have been staggering.”

He also noted considerable advances in the treatment of lung cancer and melanoma.

The Irish Cancer Society’s head of research Dr Robert O’Connor said a huge increase in the number of treatment agents is now creating assessment challenges and that the BMJ study findings are reflective of the sheer volume of new drug trials.

“The challenges now are what do you use to assess if the drug is of benefit,” he said.