Covid-19: Up to 2,500 could be hospitalised within fortnight, warns Nphet

One-quarter of all coronavirus hospitalisations have occurred since December 20th 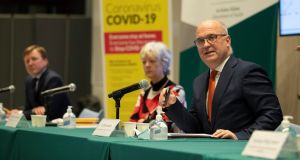 Up to 2,500 Covid-19 patients could require hospitalisation within a fortnight, with 400 needing admission to intensive care, public health officials have warned.

The health service will remain under strain for the coming weeks as a consequence of “extraordinarily high” levels of infection, Prof Philip Nolan, chair of the National Public Health Emergency Team’s (Nphet) modelling group said.

While early signs of an improvement are being seen, the level of positive cases has been so high that the health service will remain under threat for the rest of this month, he told a briefing last night.

A further eight deaths of Covid-19 patients were reported by Nphet yesterday, bringing the total to 2,352. Nphet also reported 4,929 confirmed cases of the disease, bringing to 152,539 the total number of cases detected here since the pandemic began. It has taken just eight days for case numbers to go from 100,000 to 150,000 and the 14-day incidence of the disease now stands at 1,378.7 per 100,000 people nationally.

“We are seeing numbers of cases per day, and numbers in hospital, that we just could not have comprehended prior to Christmas,” Prof Nolan said.

Chief medical officer Dr Tony Holohan acknowledged “the first glimmer of hope” with daily case numbers and test positivity rates stabilising, but pointed out that the situation in hospitals will continue to worsen due to the lag effect between infections and hospitalisations.

The current surge is almost three times bigger than that of last spring, according to Prof Nolan, who pointed out that one-quarter of all hospitalisations have occurred since December 20th.Prof Nolan said a backlog of confirmed cases had been resolved and reported last week.

There were 146 Covid-19 patients in ICU yesterday, just short of the peak recorded last spring, with 76 of these on ventilation. With a further 125 non-Covid patients in ICU, 32 beds remained free.

The highly transmissible variant of Covid-19 that first originated in the UK accounted for 45 per cent of samples genetically sequenced by the National Virus Reference Laboratory, its director Dr Cillian De Gascun said.

Although based on a small sample of 94 specimens, this represents a large increase from the 9 per cent recorded before Christmas.

Asked about the Taoiseach’s suggestion that people should wear masks outdoors, Dr Holohan said it was good advice.

He described commentary on the alleged failure to forecast the extent of the deterioration in the Covid-19 situation as a distraction.

“What’s happening now is what is important. Now is not the time for divisive debate and commentary. We know what we have to do, and we know the vaccine is coming.”