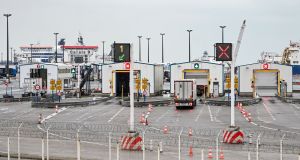 A truck takes the direction of the ferries to cross the Channel to Britain. Photograph: Denis Charlet/ AFP via Getty Images

All UK residents travelling to France on direct ferries from Ireland will require negative Covid-19 tests after the French authorities extended efforts to contain the British virus strain.

The Department of Transport issued a notice on Friday night saying lorry drivers with UK passports must prove they are resident in Ireland to be allowed into France without negative tests.

France initially banned lorry drivers from entering the country from Britain before Christmas in an effort to prevent the spread of the more infectious coronavirus mutant into the country.

The ban led to thousands of trucks, including up to 250 Irish-driven vehicles, being held up at emergency lorry parks and on road lay-bys across southern England for two days.

The restriction was lifted on the condition that drivers have the negative PCR or antigen Covid test taken less than 72 hours before embarking on their journey to France.

The French government has now extended the travel restrictions to lorry drivers with UK passports who are resident in Britain and Northern Ireland travelling on ferries from Ireland.

One industry source said that France was now “closing the side door for UK residents.”

Lorry drivers arriving into Cherbourg or Dunkirk on the direct ferries are being asked to prove they are resident in Ireland to be allowed into France without a negative test.

“The French authorities are aware that a driver could hold a UK passport and still work and live in the South,” the department said in a note to shipping companies on Friday night.

“If the driver can prove by showing proof of address in Ireland – a scanned version of a utility bill, etc – they will be allowed in without proof of a negative test.”

The department said that there have been a number of cases of UK passport holders driving Irish trucks and who could prove they lived in Ireland that have been allowed into France.

“Drivers with UK passports driving Northern Ireland-registered trucks or working for Northern Ireland haulage companies may have more difficulty in coming through,” it said.

“They risk being sent back if they do not have a valid PCR or antigen test.”

The tests must be carried out in Britain or Northern Ireland.

The department said that the level of concern about the British strain of Covid is “very high” and that France believes that it has only small clusters of the UK strain so far.

“Containing this is a priority for them at this time,” said the department.

Some Northern Irish hauliers have used the direct ferries from Rosslare to Cherbourg and on the new shipping route to Dunkirk to avoid Covid-19 related delays through Britain and new post-Brexit border controls between the EU and the UK that came into effect on December 31st.

Demand to travel on direct ferries has surged as new customs, regulatory and sanitation checks at EU-UK borders have led to delays on the “landbridge” route through UK to mainland Europe.