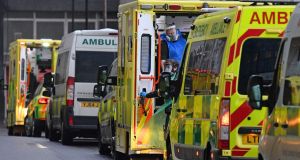 Paramedics are seen in a line of ambulances outside the Royal London Hospital, Britain. Northern Ireland reported another 26 Covid-19 deaths over the weekend. Photograph: Justin Tallis/AFP via Getty Images

As health pressures continued to mount in Northern Ireland, the North’s Department of Health reported 26 Covid-19 deaths at the weekend and more than 2,500 new confirmed cases of the disease.

On Saturday in its daily afternoon bulletin the North’s Department of Health reported an additional nine Covid-19 deaths and 1,442 new cases of the virus.

Also on Sunday, the department reported that 703 patients are now receiving hospital Covid-19 treatment. Of these, 53 are being treated in intensive care units, with 34 on ventilators.

Such hospital figures have been growing steadily. Just 11 days ago 462 people with Covid-19 were receiving hospital treatment in the North, with 34 in intensive care.

Hospital bed occupancy is at 94 per cent. Many operations, including cancer surgeries, were cancelled in recent days as health staff tried to cope with the surge in Covid cases.

On Saturday night SDLP MLA Justin McNulty posted a video on Twitter showing several ambulances lined up outside Daisy Hill Hospital in Newry. “Daisy Hill Hospital tonight. This is so scary for patients and staff. God bless them all,” he wrote.

Daisy Hill Hospital tonight. This is so scary for patients and staff. God bless them all. pic.twitter.com/75g9FXZR0e

Meanwhile, as the rollout of the coronavirus vaccines continues, Northern Ireland has been ranked fourth on a world chart of the administering of the vaccines.

According to the Our World in Data website, Israel is top of the list, with 19.55 vaccines administered per 100 of the population.

The UK figure is also broken down into figures for its four regions, with Northern Ireland top of that list with 2.22 inoculations per 100 people, based on figures as of January 3rd, placing it fourth on the world list.

The Republic is recorded as administering 0.31 vaccinations per 100 of the population.

On Wednesday the North’s Minister for Health Robin Swann reported that about 50,000 people in Northern Ireland have been vaccinated against Covid-19, with nine out of 10 care home residents being inoculated. He said that 30,000 healthcare staff had received the jab.

On Sunday PSNI officers were called to deal with a protest at the Border near Newry by people opposed to Covid-19 regulations and who also challenge the need for vaccines.

“People have a right to protest but with our hospitals full and healthcare staff exhausted Covid deniers need to have a look at themselves. This is ridiculous,” said Mr McNulty.

The PSNI said that 20 vehicles, most with multiple occupants, were stopped by police between the Border and Newry. “Those present were advised that their actions were likely in breach of both the Public Processions (NI) Act and the current Health Protection Regulations and accordingly, that they risked prosecution. After some consideration, those present elected to return towards Dublin,” a spokeswoman said.