Covid-19: Number in hospital with disease is set to be double that at peak of first wave 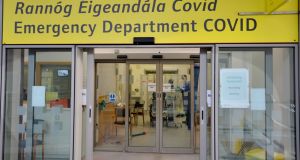 The number of people in hospital with Covid-19 in the coming days is likely to reach double the highest level of 881 recorded at the peak of the first wave of the disease last spring, the head of the HSE Paul Reid has said.

He said there were 1,421 people with the virus in hospital on Sunday, with 121 in intensive care units. Mr Reid said the health system was under “increasing strain”.

On Sunday, it was reported that there had been 136 Covid-19 admissions to hospital and 17 to ICU in the past day.

Mr Reid said there were concerns in the health service at the rising numbers of hospitalisations.

Mr Reid said a new initiative to allow the HSE to access capacity in private hospitals had already been triggered given the incidence of Covid- 19 in the community, and some patients requiring non-Covid treatment had already been sent to the private sector.

Mr Reid told RTÉ’s This Week programme on Sunday that there were 37 vacant intensive care beds for adults and 11 for children across the health system.

He said there were at present 286 fully-staffed intensive care beds in place and 16 additional such beds will be put in place by early February.

However, he said the HSE would “obviously have to move into surge capacity”, use capacity in the private sector and put back non-urgent care in hospitals to deal with the current Covid-19 crisis.

Mr Reid said that the new surge capacity for intensive care would involve a very significant mobilisation of the workforce, as there is a 7:1 ratio of nurses for each bed in such units.

“When I say we will pause some elective care, that is geared towards redirecting a lot of nurses, doctors and healthcare workers to support those additional [intensive care] beds,” he said.

Mr Reid said that while non-urgent care and day cases had been put back amid the current crisis, treatment for patients with cancer and heart problems would continue.

He said if people needed urgent care, emergency services remained in place for them.

Mr Reid said practically all private hospitals, bar the Beacon, had agreed to take part in a new agreement to provide capacity to the HSE and that talks were continuing on this over the weekend.

He said the deal would provide the HSE with access to about 600 additional beds in total and that the public system was calling on this “right now”.

“Private hospitals are taking some urgent non-Covid care, we have triggered the proposals [in the deal] already.”

Mr Reid said the HSE was mobilising to deal with 1 million vaccines per month arriving in the country.

He said the target of 35,000 Covid-19 vaccinations set for this week would be exceeded.

“We have now accelerated [vaccination among] the most vulnerable groups, which are elderly people in nursing homes, and they will be completed over the next two weeks instead of the next three.”

Mr Reid said the key game-changer would be the arrival of the new Astra Zeneca vaccine if and when this was approved by regulators, as it was easier to use and transport.

“That is the one [of which] we would expect to see much higher volumes.”

He said discussions were continuing at a European level but the health service was working on the basis of potential vaccine deliveries of up to 1 million per month by the early summer at the latest.

Earlier the HSE’s chief clinical officer said there were currently 600 hospital beds out of action due to infection control measures and staff being out sick or not in work as they are deemed to be close contacts of a person with Covid-19.

Dr Colm Henry also said there were 800 staff in nursing homes not in work at present. He said the situation in the health service on foot of the Covid-19 pandemic was very serious.

However, speaking to Brendan O’Connor on RTÉ Radio on Sunday, he said that there was still capacity at present in the acute system. He said the fear was what happens if coronavirus cases continue to rise with a peak in the distance.

Dr Henry said that people who were going to become sick from Covid-19 in the next week to 10 days or who are going to be hospitalised or admitted to intensive care with the disease had already contracted the virus. However, he said the “scary projections” for the coming weeks can be stopped if people act. “If you don’t meet people you won’t pass the virus on,” he said.

There were 4,842 new cases of Covid-19 and nine further deaths reported by the National Public Health Emergency Team (Nphet) on Saturday.

The 14-day incidence rate of Covid-19 per 100,000 population nationally is 1,162. This means that more than one in 100 people in the State have had a positive test in the past fortnight.