A record surge in Covid-19 cases in Ireland was due to increased social mixing over Christmas and was not caused by a new variant from Britain, Dr Mike Ryan of the World Health Organisation has said. 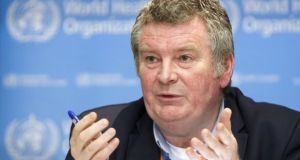 A record surge in Covid-19 cases in Ireland was due to increased social mixing over the Christmas period and is not caused by a new variant from Britain, the World Health Organisation has said.

“My own country in Ireland . . . has suffered one of the most acute increases in disease incidence of any country in the world,” the Mayo man said.

“And not due to the variant let me add, but due to increased social mixing and reduction of physical distancing,” he said. “New variant strains . . . have not been the driver of new transmission.”

Dr Ryan added that the latest figures indicated that new restrictions were already working to curb the spread of the virus.

“I was talking to my colleague Tony Holohan the chief medical officer in Ireland earlier and we were almost saying this is like adding a substitution in the second half of a football game,” Dr Ryan said.

“It doesn’t change the rules of the game, it doesn’t change what you do, but it gives the virus some new energy, some new impetus. It adds to the challenge you face because the opposition is bringing some new players to the field,” he said.

“It doesn’t change what we need to do to win. It just changes the strength of the opponent and in that sense we have to take from that that we have to redouble our efforts.”

WHO infectious disease epidemiologist Maria Van Kerkhove said countries such as Ireland had seen “near vertical” exponential growth in cases due to mixing over Christmas and New Year.

“Transmission was down to single digits in most countries in Europe over the summer. And we lost the battle because changed our mixing patterns over the summer, into the fall, and especially Christmas and New Year holidays. The number of contacts that individuals had and their families had increased significantly,” Dr Van Kerkhove said.

“Those countries that have managed to bring transmission down: keep it down. Do everything you can to keep it down . . . If any cases are identified any clusters are identified, really quick, rapid, aggressive investigation of those cases, so that those small numbers of cases do not become community transmission. We have been shown over and over again that countries can do this.”

The Geneva-based health experts urged individual citizens to keep their distance, reduce their contacts, wear masks, ventilate rooms, keep their hands clean and cough into their elbow to combat the spread of the virus. Countries must also support their citizens in observing quarantine, they added.