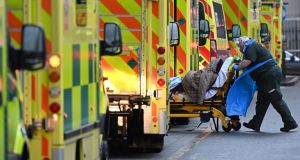 A paramedic is seen outside the Royal London Hospital in England earlier this week. The UK’s total confirmed Covid-19 cases has passed 3m. Photograph: Justin Tallis/AFP via Getty Images

Nine more people have died of coronavirus in Northern Ireland, the North’s Department of Health has confirmed.

The news comes as the UK on Saturday became the first country in western Europe to have reported more than 3 million coronavirus cases.

The latest figures bring the total death toll in the North from Covid-19 to 1,443 since the onset of the pandemic.

Another 1,442 cases of the virus were also confirmed in Northern Ireland on Saturday.

In total there have now been 87,588 positive cases in the North since the beginning of the pandemic.

It comes as its health service comes under severe pressure, with hospitals at full capacity and cancer surgery among the operations cancelled in Belfast.

There were 674 people with Covid-19 in hospitals across Northern Ireland on Saturday, including 47 in ICU.

The Newry, Mourne and Down district has the highest incidence rate in the region, at 858 cases per 100,000 of the population, followed by Mid Ulster at 798.5 and Armagh City, Banbridge and Craigavon at 794.2.

People can be ordered to return to their homes by police as part of measures agreed by Stormont Ministers.

Tighter rules in relation to movement will remain in place until February 6th, with a review later this month.

The UK passed the milestone of 3 million confirmed coronavirus cases as it grapples with a new strain of Covid-19.

The UK reported an additional 59,937 cases of Covid-19 on Saturday, taking its total number of confirmed cases to 3,017,409. The total is the fifth-highest in the world, according to data from Johns Hopkins University.

A further 1,035 people in the UK were reported to have died within 28 days of a positive coronavirus test, bringing the total UK death toll from Covid-19 to more than 80,800, the most in Europe.