‘We’re not asking for a change in the rules, we’re just asking that you process applications faster’ 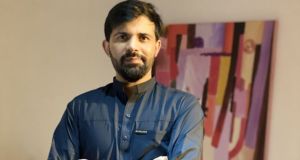 Dr Mohsin Kamal, a registrar in infectious diseases at Children’s Health Ireland Crumlin, said ‘This has been a very tough year, not just for immigrant workers but very everyone.’

Applications for Irish citizenship from migrant healthcare workers should be fast-tracked in recognition of their work during the Covid-19 pandemic, foreign doctors working in Irish hospitals have said.

Non-European healthcare workers are calling on the Department of Justice to fast-track their naturalisation process, saying delays in the system are causing “frustration” and “desperation”.

They say healthcare workers, and their family members, who meet all citizenship requirements and have lived in Ireland the requisite time should have their applications expedited rather than waiting more than two years for the process to be completed.

“We’re not asking for a change in the rules. We’ve already filled the criteria of being here five years, paying taxes and having a good character,” says Dr Mohsin Kamal, a registrar in infectious diseases at Children’s Health Ireland Crumlin. “We’re just asking that you process our applications faster.”

“This has been a very tough year, not just for immigrant workers but very everyone. If the Government did this it would boost our confidence and our morale. It would show an appreciation for the work we’re doing. This should just happen, we shouldn’t need to push for this.

“If we have an Irish passport we can have better work contracts, more job security and security for our families and we don’t need to struggle with visas.”

More than 5,300 people had been waiting longer than two years for their citizenship applications to be processed at the end of November 2020 while a further 3,202 were waiting between 18 and 24 months. The Government’s immigration website states a “straightforward application” for Irish citizenship should take 12 months to process.

In a letter sent to the Taoiseach, the Tánaiste, other Government ministers and President Michael D Higgins, the Train Us for Ireland group, which represents around 200 non-European healthcare workers, says fast-tracking the process would provide greater stability for frontline migrant workers and their families.

Citizenship would also make it easier for non-EU doctors to qualify for specialist training programmes which allocate places through a preference system starting with Irish citizens, the letter says. It would also enable them to travel at short notice, without applying for a visa, if a family member in their home country becomes ill.

Participants in the survey described “feelings of demoralisation, frustration, desperation” around the delays in their applications. These long delays and lack of transparency will result in a “massive brain drain of skilled immigrant healthcare workers on an already burdened system”, says the group.

The letter points out that nearly 13,000 healthcare workers have contracted the virus, based on data released by the Health Protection Surveillance Centre before Christmas, and calls on policy makers to take note of measures taken in France which has started fast-tracking citizenship applications from foreign healthcare workers.

Dr Liqa ur Rehman, a neonatology registrar at Galway University Hospital who co-founded Train Us for Ireland, says most foreign doctors end up waiting eight years for Irish citizenship.

“We are at the end of frustration with citizenship delays and this crucial step would be a huge positive for us and attract more healthcare workers from abroad to work in Irish hospitals,” he said.

A spokesman for the Department of Justice said there were “no provisions to apply different criteria” to different citizenship applicants based on a person’s line of work and that “appropriate procedures” must be kept in place to “preserve the integrity” of the naturalisation process. All applications were “processed and assessed individually in accordance with legislation”.

Minister for Justice Helen McEntee was conscious of a “significant backlog” of applications but would be re-starting the granting of citizenship process this month without the in-person ceremonies which were put on hold last year because of Covid-19, the spokesman added.

“It is anticipated that, as the backlog is cleared, frontline workers who are awaiting naturalisation will be among those granted citizenship under the new, temporary approach,” said the spokesman, adding that Ms McEntee “recognises and acknowledges the crucial role front-line workers are continuing to play in responding to the threat of Covid-19”.