Union says pharmacists must be prioritised for early inoculation against coronavirus 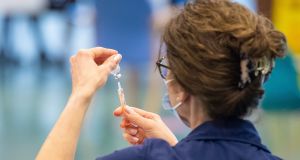 A healthcare worker prepares a dose of the Oxford-AstraZeneca shot in the UK. Photograph: Dominic Lipinski/PA Wire/Bloomberg/File

Pharmacists are “likely” to be involved in the rollout of Covid-19 vaccines once the Oxford-AstraZeneca shot is approved for use, an industry group has told members following talks with the State.

Following negotiations with the Department of Health and the Health Service Executive (HSE) in recent days, Irish Pharmacy Union (IPU) secretary general Darragh O’Loughlin told members: “It now looks likely that the vaccine rollout in pharmacies will commence once supplies of the Oxford-AstraZeneca vaccine are approved and available.”

In an update to members, the IPU also said it is insisting that pharmacists “must be prioritised for early vaccination”, and suggested that they could be vaccinated by the end of next month.

Approval of the jab, which has less-demanding storage conditions than vaccines currently approved for use in the European Union, is expected in January. It has been described as a “game changer”, and should enable a faster and more widespread immunisation campaign to take place. It has lower efficacy rates, of around 70 per cent, than the two vaccines currently cleared for use in Ireland.

The Irish allocation of this inoculation is about 3.3 million, or enough to vaccinate 1.65 million people with a two-dose regime.

Senior officials from the Department of Health and HSE have also indicated that pharmacists are to be considered in group 2 of the provisional vaccine allocation groupings, which covers frontline healthcare workers with direct patient contact roles, Mr O’Loughlin wrote to members.

With the initial focus on workers in acute hospitals, as well as residents and staff in long term residential care, IPU members were told that once that process is completed - and depending on vaccine stocks - other healthcare workers including pharmacists will be immunised.

“Subject to vaccine supplies being available, the current indications are that this process should be completed by the end of February. We will continue to push for a date by which vaccination of pharmacy teams will commence,” Mr O’Loughlin wrote.