CSO figures show rise in close contacts, as Dublin accounts for half of deaths since October 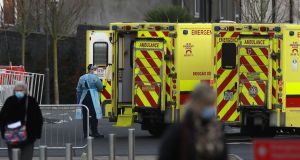 A paramedic and ambulances at the Mater Hospital in Dublin amid the current Covid-19 surge. Photograph: Brian Lawless/PA Wire

The number of close contacts of people diagnosed with Covid-19 rose slightly in the first week of January, new data shows.

The average positive case had 3.24 close contacts in the week ending on January 8th, up from 3.02 in the week previous.

This marginal increase was represented across all age groups, with people aged 15 to 24 maintaining the most close contacts of any age group. This cohort had an average of 3.73 close contacts, compared with 3.55 for those aged 25 to 44 and 2.18 for people over the age of 80.

Examining the epidemiological date of cases, which is based on the earliest date a confirmed case was suspected, reveals that the surge in cases the State is currently experiencing began about December 20th.

The epidemiological date depicts when Covid-19 symptoms were first noticed in a case, or, in the case of those who are asymptomatic, the earliest date available from when a person was tested, a laboratory received a swab, or when a laboratory reported a confirmed case. This data is particularly helpful in trying to determine the most accurate timing in relation to a case.

By looking at this data, rather than at the daily cases notified to the Health Protection Surveillance Centre (HPSC), one can see a peak on December 28th, when 5,508 people who were later confirmed as cases reported the onset of symptoms or were tested or their swabs were examined.

Looking at the epidemiological date, the rate of cases remained high until January 5th, and then began to decline. A lag in the reporting of cases can thus be seen by the fact that cases notified to the HPSC peaked on January 8th, when 8,248 additional infections were announced.

At times over the Christmas period the number of daily cases reported to the HPSC fell below the number of positive tests confirmed, resulting in a backlog of cases to be announced. This discrepancy became quite stark between December 27th and December 31st. While just 1,602 new cases were announced on December 31st, 5,621 tests were confirmed to be positive that same day.

Since the start of the pandemic, in addition to the Republic’s official death toll from Covid-19, which is now at 2,536, a further 231 deaths are presumed linked to the virus. For the week ending January 8th, 85 Covid-19 deaths were recorded, of which 34 were in Co Dublin, eight were in Co Cork and five in Co Tipperary. All other counties had fewer than five deaths during the first week of January.

About half of the people who have died from the disease since October have been Dublin residents. While the county represents 28 per cent of the State’s population, it accounted for 46 per cent of Covid-19 deaths in 2021. It is one of the few counties that is overrepresented in the national death toll. Nine per cent of those who have died from the disease since October were residents of Co Kildare, a county home to just 5 per cent of the national population. Covid-19 deaths in counties Donegal, Cavan, and Monaghan were each overrepresentative of their populations by a percentage or two.

Meanwhile, there have been few deaths in Co Cork relative to its population. Since October, the county has represented no more than 4 per cent of Covid-19 deaths, despite housing 12 per cent of the State’s population.