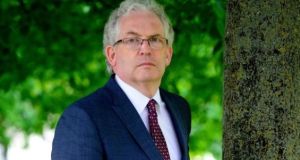 Tony O’Brien: We lost about 10 years in terms of investment in ICT for a variety of reasons. File photograph: Cyril Byrne

Ireland’s health system is disadvantaged compared with countries such as Denmark and Israel because it is not highly digitised, the former head of the HSE has said.

Tony O’Brien said a lack of communication about the vaccination roll-out is leading to concern among the public.

The governing factor is supply and mix of supply, he told Today with Claire Byrne on RTÉ radio.

“As the programme ramps up I’d be very confident that the HSE will be communicating that, but at the moment it’s not visible. That’s what’s giving rise to concern.”

Mr O’Brien said that the approval of the AstraZeneca vaccine would be a game changer as it will make delivery of vaccine into local areas possible. Things will become clearer when and if that approval comes, he said.

“It would be advantageous if there was a slightly more clear understanding on the part of the population about what’s going to happen.”

Mr O’Brien said that he understood the hesitancy about “playing out one plan” when there were probably three or four different options under consideration.

The HSE had one disadvantage compared to countries like Denmark and Israel, he said, which was that they had both highly digitised health systems, which Ireland did not. That will make it slightly more complicated — both to track and call patients. That’s an added layer of complexity, he added.

“We lost about 10 years in terms of investment in ICT \[information and communications technology\] for a variety of reasons — a lot of things are being done to catch up.”

The inclusion of vaccination figures on the HSE’s dashboard on Thursday night was an indication that the HSE was working on digitising the process, he said, but clearly it was a complex issue.

“They are following the standard process that exists and at the same time seeking to improve on it.”

It was really significant that in the last few days Ireland had caught up and was now the second in Europe. “This is a marathon not a sprint.”

Some of the time so far has been used to get the procedures right, he said. “The easiest part of this process is actually putting the needle into somebody’s arm.”