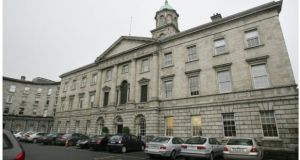 International standards dictate that every child in such a unit should have 16 sq m of space, but in the Rotunda there is just 5 sq m available. Photograph: Alan Betson

The Government has been warned of an “urgent and serious need” to address overcrowding in the neo-natal unit of the busiest maternity hospital in Europe and one of its oldest.

Concerns about the provision of best practice care in the Rotunda Hospital’s neo-natal intensive care unit have been repeatedly highlighted in reports pointing out to sub-optimal conditions in Irish maternity facilities including inadequate space.

International standards dictate that every child in such a unit should have 16 sq m of space, but in the Rotunda there is just 5 sq m available.

The maternity hospital, built in 1757, is set to move to Connolly hospital in Blanchardstown.

Green Party health and finance spokeswoman Neasa Hourigan said however the 1,300 babies who need the unit out of the 8,000 born annually in the hospital cannot wait the 15 to 20 years it will take for the move.

Pointing to the impact of such space limitations on infection control she appealed to the HSE and Minister for Health Stephen Donnelly to provide additional funding for the plan prepared by the hospital’s management for the immediate development of a critical care wing in the Parnell Square, Dublin site.

Ms Hourigan, in whose Dublin Central constituency the hospital is located said it would cost an estimated €61 million but “it is really only the commissioning costs of less than €5 million that would be non-transferable”.

She said the hospital had won awards for its innovative care but it “is trying to provide 21st-century medical care in an 18th-century infrastructural set-up”.

Ms Hourigan who is the party’s health and finance spokeswoman said there is a “significant business and medical case” for the wing which she said could mitigate current risks in the medium term and it had already been approved by Dublin City Council’s planning department.

Ms Hourigan who is also chair of the Oireachtas Committee on Budgetary Oversight acknowledged the plan to move the hospital but action was needed in the interim and they were witnessing a “false economy” because “the cost to families and the State when things go wrong is well known” and the current position is not best practice.

She added that health inspectorate Hiqa “has repeatedly stated that capital investment is needed in modern maternity facilities and buildings, and that that investment must be timely”.

When she raised the issue in the Dáil, Minister of State Anne Rabbitte said €250,000 is being allocated this year to address areas of critical risk, particularly in the neonatal intensive care unit.

She acknowledged the need to address the risks but added that development and investment had to be limited to addressing “priority patient safety risk” because of the planned move to Blanchardstown.

An additional €100,000 was provided for preparation of reports to support the proposed development and the HSE was considering the finalised reports.

Ms Hourigan appealed for additional funding so the hospital could complete a final business case and initial planning document and design, a required process before a green light could be given.

The Minister said she would arrange a meeting between Ms Hourigan, the Minister for Health and interim Secretary General of the Department of Health Robert Watt.