Ireland may receive just half of expected 40,000 doses next week 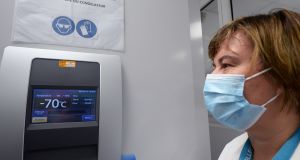 A pharmacist looks at a screen indicating a temperature of -70 degrees on a supercooling freezer containing the Pfizer/BioNTech Covid-19 vaccine at a hospital in Le Mans, France this week. Photograph: Jean-Francois Monier/AFP via Getty Images)

Pfizer will temporarily reduce deliveries of its Covid-19 vaccine to Europe while it upgrades its production capacity to two billion doses a year. However, the company confirmed on Friday night that the move will only impact supplies next week.

In a statement, Pfizer said its plant in Belgium, which provides all supplies for Europe, would experience a temporary reduction in the number of doses delivered next week.

“We will be back to the original schedule of deliveries to the European Union beginning the week of January 25th, with increased delivery beginning [the] week of February 15th resulting in our ability to deliver the fully committed quantity of vaccine doses in the first quarter and significantly more in the second quarter,” Pfizer said.

It is unclear just how big the shortfall next week will be.

A meeting that was due to be held between Pfizer and the Department of Health on Friday, to update the Irish authorities and allow them to make any necessary adjustments to the roll-out schedule, was subsequently cancelled.

Reports from Lithuania said earlier that it was told it would get just half its projected supply. Norway’s Institute of Public Health, which first broke the story, said it had been told to expect an 18 per cent shortfall.

Industry sources said Ireland was likely to receive about half of the 40,000 doses due next week in light of Pfizer’s decision to concentrate the supply squeeze into one week. It had been expected that supplies would be constrained for up to three or four weeks into February.

Pfizer is increasing its output of the vaccine from 1.3 billion doses to two billion. Of this, 260 million extra doses will be achieved by taking six full doses from each vial instead of the original five. The upgrade of the company’s Puurs plant in Belgium will deliver the additional 440 million doses this year.

The head of the Government’s vaccination taskforce had said earlier that it may have to adjust its roll-out plan because of the decision. Prof Brian MacCraith told RTÉ Radio’s News at One that the taskforce’s implementation model had been built around the amount of product available.

While he said he had “a high degree of confidence” about deliveries, he was awaiting more details from Pfizer so that he could be more precise.

With a sharply reduced supply, the focus next week is now expected to be on those people due their second shot of the Pfizer/BioNTech vaccine, rather than begin to vaccinate those next in the priority order.

In a statement, Pfizer Ireland said it was “working hard to deliver more doses than originally forecast this year with a newly stated goal of two billion doses in 2021. To do this, Pfizer is scaling up manufacturing operations to increase dose availability and output”.

“He reassured me that all doses of the first quarter will be delivered in the first quarter. He is personally on the case on reducing the delay period and to make sure they will catch up as soon as possible.

“He has confirmed. . . that they have guaranteed these doses and will deliver these doses.”

Government sources said work to assess the impact of the news on deliveries of the BioNtech-Pfizer vaccine to Ireland were being undertaken, and while it had the potential to slow down the Irish vaccine programme, it was too early to be definitive.

The impact on the roll-out, which is planned to ramp up even further in the coming weeks based on confidence about Pfizer deliveries, will depend on the scale and duration of the reduction in vaccine deliveries, source said.

Prof McCraith remarked: “I’ve always said that the implementation plan had to be agile. We will wait and see. It is difficult to predict. We will adjust accordingly.”

Pilot mass vaccination centres will be set up this weekend in Dublin, Galway and Portlaoise to support the GP community, he added. Advance planning on the remaining 12 centres was ongoing, he said, with discussions taking place with local authorities.