Making a Cabinet: Eamon Ryan set to head up new department of climate action and transport 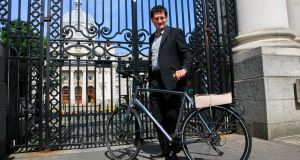 The Green Party is set to have four TDs at the cabinet table if the party approves the programme for government today and the coalition is formed over the weekend.

The Greens will have three full cabinet ministries, and also a “super junior” , a junior minister who does not have responsibility for a full government department but who sits at the cabinet table.

There will be three super juniors, it is understood – one for each of the parties, including the government chief whip, which is likely to be a Fianna Fáil appointment, if Micheál Martin is elected taoiseach tomorrow.

While the outcome of the vote in the Green Party remains uncertain, planning continues for the construction of the new government. The three party leaders met yesterday to discuss the organisation of departments, but sources say that a number of issues are not yet resolved. It is expected that the three men will meet again today.

There is feverish speculation about the Fine Gael and Fianna Fáil nominees for the cabinet. The two parties will have six cabinet members each, plus one super-junior each, and seven other junior ministers, it is expected.

Within Fine Gael, four current Cabinet members are viewed as certainties - Leo Varadkar, Paschal Donohoe, Simon Coveney and Heather Humphreys. After that, Helen McEntee is tipped for promotion from the junior ranks to a full cabinet job, which leaves one full cabinet job and the super junior role – with several outgoing ministers seeking each.

Minister for Health Simon Harris is widely credited with an effective handling of the Covid-19 crisis, especially in its early stages, and a demotion from Cabinet would be seen as extremely harsh. However, his inclusion would mean there is no place for Minister for Housing Eoghan Murphy, a close personal and political ally of Mr Varadkar, and someone who is seen in Fine Gael as having taking a lot of flak for the Taoiseach on the housing issue. Other party sources say that Hildegard Naughten, the Galway West TD who was part of the negotiating team, has a strong case for inclusion and she will be helped by both gender and geography.

Either way, if the Government is formed tomorrow, Mr Varadkar will have no option but to end the cabinet careers of several long-standing Fine Gael ministers, with Michael Ring, Joe McHugh, Charlie Flanagan, Paul Kehoe, Josepha Madigan and Richard Bruton all thought by their colleagues to be unlikely to make cabinet, though some sources speculate that a role will be found for Mr Bruton, and others may fill junior minister roles.

In Fianna Fáil, as the party anticipates a return to government for the first time in almost a decade, the situation is more fluid. With Micheál Martin poised to become taoiseach, it is considered certain that Michael McGrath will take the role of Minister for Public Expenditure. Barry Cowen, Jack Chambers and Dara Colleary are also tipped for cabinet or super-junior roles, while Darragh O’Brien, Anne Rabbitte, Thomas Byrne or new Kerry TD Norma Foley could also figure.

The fate of justice spokesman Jim O’Callaghan is much discussed in party circles. While he is one of the party’s more prominent TDs, his relations with party leader Mr Martin have not been easy in recent months.