Costs of free GP care for all could increase ‘exponentially’ 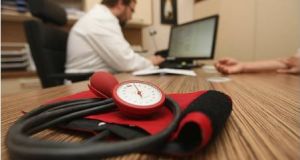 Universal access to GP care has been an ambition of politicians for years, though it has only begun in earnest in recent years with under-6s and people over 70. File photograph: Getty

The cost of providing universal free GP care could multiply dramatically if family doctors seek higher fees for every additional age group as they are added, the Government’s spending review has warned.

The Department of Public Expenditure review says providing free GP care for the entire population would cost an extra €630 million each year, rising to €840 million a year over the coming 10 years.

However, these estimates do not take into account the impact of costs brought about by the creation of a new model of GP care in Ireland which could accompany expansion to universal eligibility.

The estimates do not consider potential cost pressures arising from negotiation with general practitioners, who have previously struck hard bargains with the State, the spending review warned.

Further work should be done on costing universal GP care, including ideas such as co-payments, where costs are split between the patient and the State, “to help ensure financial sustainability”.

“Given the propensity for substantial rate increases in recent negotiations, it is vital that the cost of expansions is clearly linked to the actual cost of providing the service to the newly eligible cohorts.

“Given the enormity of the projected costs, it is clear that any universal expansion should be carefully considered. As such, expansion through threshold alterations in order to ensure that those most in need of these health services is recommended as a policy option.”

The review says about 2.1 million people in Ireland – 43 per cent of the population – have access to free GP care through either the Medical Card or GP Visitation Card.

The spending review says the introduction of free GP care for children under age six and for people over 70 “has been recognised as the first steps towards universal GP care in Ireland”.

“It creates a precedent in which the following age cohorts can follow.”

A recent €200 million deal between the Government and the IMO acknowledges that it is planned to extend free GP services to children under 12 years on a phased basis from next year, subject to further talks on contractual and remuneration issues.

The review says that while “the sheer cost of universal eligibility necessitates expansion on a phased expansion”, the limitations of expansion based on age cohorts should still be considered.

“Costs have the potential to increase exponentially if GPs demand increased capitation rates (or other fees) each time a new cohort is covered (over and above what significant increases were approved for the Under-6s expansion and other cohorts as part of the recent General Medical Service contract). In principle, universal expansion of free GP care by age cohort regardless of means is inefficient and arguably promotes inequality. Any universal expansion by age-cohort would take considerable time and risks not targeting those least able to afford such cover.”

Universal access to GP care has been an ambition of politicians for years, though it has only begun in earnest in recent years with under-6s and people over 70.

The Department of Health now intends to expand free GP care to cover all those aged under 13 on a phased basis, and this has been accepted by GPs in the new GMS contract.

“Significantly, future funding streams that will inevitably be required by Government to address capacity constraints from this ambitious extension is not addressed,” said the report.

“Given the propensity for substantial rate increases in recent negotiations, it is vital that the cost of expansions is clearly linked to the actual cost of providing the service to the newly eligible cohorts.”