One in seven older Irish adults not getting enough sleep – research 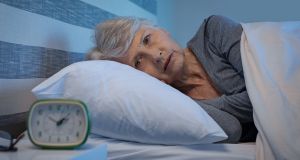 Sleep duration recordings taken during summer months were shorter than those taken in autumn and winter. Retired and unemployed adults, and those on anti-depressant medication, recorded longer sleep periods. Photograph: iStock

One in seven older Irish adults is not getting enough sleep, resulting in increased risk of health problems, according to new research.

A similar proportion are sleeping longer than is recommended, which can also lead to negative health outcomes, the study by Trinity College Dublin researchers found.

The duration of sleep increases with age, with adults aged 50 years and older sleeping for an average of seven hours and 42 minutes a night.

The recommended sleep range is seven to nine hours for adults aged 26 to 64 years, and seven to eight hours for those aged 65 years and older. Previous research has shown that sleeping too little, and too much, are risk factors for premature mortality, cardiovascular and chronic disease, and impairments in cognitive and mental health.

Using devices fitted on their wrists, the 1,533 participants reported their own sleep durations over a one-week period.

Sleep duration recordings taken during summer months were shorter than those taken in autumn and winter. Retired and unemployed adults, and those on anti-depressant medication, recorded longer sleep periods.

Lead author Siobhan Scarlett said the research showed an important subset of Irish adults were not meeting recommended guidelines for sleep duration and so were at increased risk of negative health outcomes.

Many sleep factors affecting sleep duration can be modified, she pointed out. “Addressing the underlying causes of undesirable sleep patterns may help to facilitate improvements in the health and wellbeing of our older population.”

The study, which is part of the Irish Longitudinal Study on Ageing (Tilda), are published in the Journal of the American Geriatrics Society.