Donohoe says future needs will be different in terms of skills mix, technology and geographical footprint 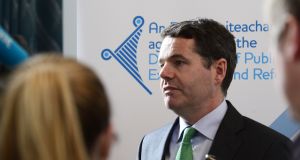 Minister for Finance Paschal Donohoe said a review of the Civil Service would ‘consider the location of support offices and services to ensure consistency’ with the goals of the Government’s national development plan.

The Government is to carry out a review into the future workforce and office requirements of the Civil Service.

Minister for Finance, Public Expenditure and Reform Paschal Donohoe said the planned exercise would “consider the location of support offices and services to ensure consistency” with the goals of Ireland 2040, the Government’s long-term national development plan, and balanced regional development.

Mr Donohoe said the review would be completed next year.

The Minister said staff numbers in the broader public service had increased by more than 42,000 since 2014 and now stood at 335,594. He said the numbers employed in the Civil Service had also expanded over the period concerned.

Mr Donohoe said “demographic changes and the next wave of technological change will place new demands on key offices and departments”.

“The Civil Service of the future will be different in terms of its skills mix, use of technology and geographical footprint. We are therefore developing a longer term vision and strategy for the Civil Service,” he said.

The trade union Fórsa, which represents about 80,000 staff across the civil and public service, said it would expect to be briefed by the Government on its plan and examine the initiative further at that stage.

1 Coronavirus: A further 123 cases reported in meat processing plants over past week
2 Madeleine McCann case: Police identify German prisoner as suspect
3 Luke ‘Ming’ Flanagan bares his bottom half to European Parliament
4 Mother of three (41) who had to fundraise for her own cancer treatment has died
5 Independents offered Jackie Healy-Rae style deal to support new coalition
Real news has value SUBSCRIBE