Budget 2020: No sense that implementation of Sláintecare vision for future is imminent 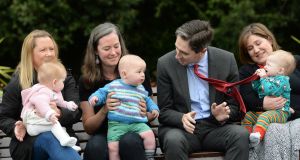 Since Simon Harris became Minister for Health three years ago, Donnelly said, he has had an additional €3.5 billion to spend “and, in spite of that, access to public healthcare has collapsed”.

It was an undeniable fact, particularly as, on the same day he was speaking, University Hospital Limerick had 82 patients waiting for admission, a new record for overcrowding for any hospital in the Irish health service.

Now that sum is set to become an additional €4.5 billion, after Minister for Finance Paschal Donohoe announced a further €1 billion for the health service in Budget 2020.

In keeping with this Government’s general take on overspending, Donohoe did not seem too put out by health’s failure to balance its books once again. At least they’re doing better than last year, was his effective take, before signalling the need for a supplementary budget of about €300 million this year.

It is obvious the billions in extra funding for our challenged health service would not have been possible without the windfall tax bonanza from Irish-based multinationals of recent years.

Effectively Google, Apple et al are shoring up the sector. One wonders what these companies would say if they were actually running the service.

On budget day there were 501 patients on trolleys in the State’s hospitals. Since the start of the year, an additional 50,000 patients have joined the outpatient waiting list. Indications are that the spending situation at the €1.7 billion children’s hospital project may be getting even worse.

The State’s inpatient list has been cut slightly, it must be noted.

But it must also be noted that for a €75 million investment in the National Treatment Purchase Fund, the number of people waiting for operations fell by just 3,637 between January and August. Hardly the greatest return on such a large investment.

In his budget speech Donohoe announced an additional €25 million for the NTPF, no doubt in response to lobbying from Fianna Fáil, which set up the fund and retains a belief in its ability to clear waiting lists on a sustainable basis that is hardly justified by its performance.

In response to questions about where the extra money has been spent, the Government points to increases in population, hospital attendances and the ageing profile of the population putting pressure on the system. It highlights improvements in life expectancy and survival rates for cancer and other conditions.

There have been some improvements, but no one disputes the fact that the system is broken.

That’s what Sláintecare was supposed to be about, and yet there is no indication in Budget 2020 that the full-scale implementation of this plan for the future of the health service is imminent. This is, in part, because the plan was never properly costed.

Although some project funding was provided for Sláintecare, Budget 2020 was not the “game-changer” the health service needs, as the Irish Nurses and Midwives Organisation said.

Instead it contained measures such as free GP care for under-8s and free dental care for under-6s that are intended as lines in next year’s Fine Gael election manifesto. These will have to be negotiated with doctors and dentists first, and no doubt their representatives will seek to strike a hard bargain.

Improvements in access to medical cards and reduced prescription charges for over-70s may go some way to assuaging dissatisfaction among older people at the lack of a rise in the State pension.

The extra one million home-help hours being provided is welcome, but much of this allocation may be used up in meeting pent-up demand.

Access to the scheme has been restricted for much of the year, with over 6,000 people on waiting lists at the end of August.