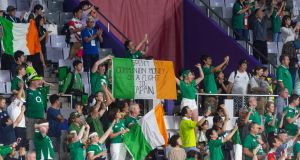 Irish rugby fans have been warned of the danger of contracting measles during the World Cup. An estimated 30,000 Irish supporters have travelled to Japan. Photograph: Inpho

Health experts have warned Irish rugby fans of the danger of contracting measles during the World Cup following outbreaks of the highly infectious disease in Japan.

One of the outbreaks has occurred on public transport in Tokyo which has been widely used by rugby fans from Ireland and other competing nations.

Several confirmed measles cases used the Tokyo public transport system in September, especially from September 21st to 25th, while they were infectious, according to the HSE’s Health Protection Surveillance Centre (HPSC).

They travelled on six specified lines during this period.

According to the HPSC: “Japanese authorities have reported confirmed measles cases on public transport in Kawasaki City in Kanagawa Prefecture and Shinagawa Ward in Tokyo Metropolis, Japan. These are areas where Irish rugby followers are likely to have travelled”.

An estimated 30,000 Irish supporters have travelled to Japan for the 2019 Rugby World Cup.

The HPSC says many international travellers coming to Japan for the Rugby World Cup used railways in the capital region (Kanto Region) to move to and from game venues and might have been exposed to measles when they used Shinkansen (bullet train) or local trains.

“In accordance with the Infectious Disease Control Law in Japan, the health authorities have implemented control measure for measles including case investigation, contact tracing, and emergency measles-containing vaccine vaccination when needed.”

So far this year, 58 cases of measles have been reported in Ireland, many of them imported by travellers from other countries.

Measles starts with fever, cough, runny nose and red eyes. It is followed a few days later by a red rash that starts on the head and spreads downwards over the face, neck and body.

The virus can cause chest infections, fits, ear infections, swelling of the brain and brain damage, and can be fatal.