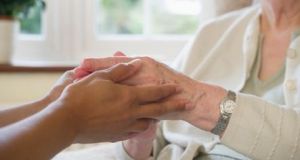 An additional one million home help hours are to be provided next year in an attempt to reduce waiting lists for the service and speed up departures from the State’s hospitals.

One million additional home help hours are to be provided next year in an attempt to reduce waiting lists for the service and speed up departures from the State’s hospitals, the Government has announced.

The move follows recent warnings from the HSE that demand for supports in the home could not be met from existing resources.

Jim Daly, the Minister of State with responsibility for older people, said an additional €52 million would be invested in home supports next year. The aim of the investment is to enable older people to remain in their homes and to help people to leave hospital more quickly, he said.

Under the HSE Home Support Service (formerly called the home help service) carers provide people with help in doing things such as getting in and out of bed, dressing and undressing, showering and household duties.

Mr Daly said the additional funding would allow the HSE to deliver some 19.2 million hours of home support next year, an increase of one million hours.

He said around a quarter of these hours would be used in the testing of a statutory home-support scheme, which is part of the Government’s Sláintecare plan to reform the health service.

The new scheme, expected to be introduced in 2021, could see the introduction of some form of means testing for home supports. However, a final decision has not yet been taken on this.

“It is a long-held commitment by Government to support people with care-needs to continue to live with confidence, security and dignity in their own homes and communities for as long as possible,” Mr Daly said.

“In developing this scheme, we want to devise an approach that supports people living at home with care needs along the continuum of care, building on the existing service-provision and having regard to good practice internationally in relation to health and social care delivery.”

The latest HSE figures showed there were 7,300 people waiting on home help hours, a statistic that Mr Daly said made him feel “ashamed”.

HSE chief executive Paul Reid said earlier this year that more than €445 million had been allocated to provide 53,000 people with some 17.9 million hours of support in the home.

The representative organisation for companies involved in the provision of managed home care services, Home and Community Care Ireland, welcomed the additional funding. It estimated it would require about €50million and the provision of two million additional hours to fully clear the current waiting lists.

Mr Daly also said patients would be discharged from acute hospitals in a speedier manner over the winter period. “Funding has been made available to take immediate action to mitigate the challenges”.