Chief Medical Officer Dr Tony Holohan says that he does not expect complacency among the public over the lower than expected positive tests numbers for Covid-19. Video: RTÉ 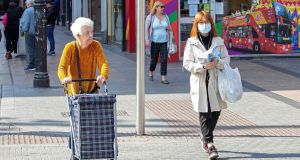 People wear face masks as they walk past shops in Dublin on Wednesday. Photograph: Paul Faith/AFP via Getty Images

Ireland’s ability to treat coronavirus patients in intensive care could be the quickest to be overwhelmed in the EU, according to a new report.

The warning from the European Centre for Disease Control (ECDC) comes as two more patients with Covid-19 died on Wednesday, bringing to nine the total number of deaths in the Republic from the disease.

The two deaths were of a woman in the east of the country, who had an underlying health condition, and a man, also in the east.

Some 235 new cases were also reported by the National Public Health Emergency Team (NPHET), the highest daily total since Ireland recorded its first case almost a month ago. The total number of cases is now 1,564.

Ireland’s intensive care facilities can cope with just 5.6 people in every 100,000 needing to be hospitalised, the lowest level in Europe, according to the ECDC.

Its estimate is based on a scenario of 18 per cent of hospitalised patients needing ICU care, as happened in Lombardy during Italy’s outbreak. The next-most vulnerable country is the United Kingdom, which can cope with up to 6.7 cases per 100,000.

The ECDC’s modelling is based on official figures for ICU capacity in Ireland, and does not take account of actions taken to increase this capacity in recent weeks.

Asked on Wednesday night about the provision of intensive care facilities, HSE chief clinical officer Dr Colm Henry said “extensive preparations” had been made for increasing ICU provision. Baseline capacity of 220 beds had been increased to about 500 and further capacity was available through the provision of “ICU-type” care outside acute hospitals, including in private hospitals.

Dr Henry also said personal protective equipment for medical staff would be flown to Ireland from China in 50-60 flights, beginning on Sunday.

The ECDC says that if the pandemic remains on its current course without strong countermeasures and surge capacity enacted, there is a “high probability” many EU/EEA countries will experience demands that far exceed currently available ICU capacity.

“If this trend continues, it is likely that in days or a small number of weeks, prevalence similar to Hubei province and Italy will be observed in most EU/EEA countries,” the EU agency warned on Wednesday in its latest update on the pandemic.

NPHET on Wednesday night defended the change in case definition that ruled out sending people with only one symptom of Covid-19 for testing, as previously applied. GPs around the country reported being inundated with calls from patients seeking clarification or wanting to be reassessed on Wednesday following the change.

Chief medical officer Dr Tony Holohan pointed out that only 6 per cent of tests carried out so far had come back as positive. If Ireland performed a test on everyone who had sought one it would be going beyond what any country in the world has done, he said.

British health officials said a 15-minute test for the virus may be made available through pharmacies and online delivery services. The UK government said it had bought 3.5 million antibody test kits.

Asked whether Irish authorities might do the same, Dr Holohan said NPHET would like to have a “reliable” serological test available but was “not at this point yet”.

NPHET is to meet on Thursday to consider whether Covid-19-specific hospitals should be established during the surge of cases expected in the coming weeks. Wards and other segregated areas have already been designated in many hospitals but Thursday’s meeting will also consider whether to designate some hospitals, particularly in Dublin, for this purpose.

Also on Thursday, legislation allowing a new wage subsidy scheme to come into effect is due before the Dáil.

The scheme to help workers through the pandemic and keep them connected with their employers will involve €410 being paid a week for all qualifying employees over the coming weeks as the Government moves to push cash out as quickly as possible.

This will allow companies to support wages and initially simplify the scheme before the more complex graduated subsidy system from next month.