Coronavirus: Glimmer of hope reflected in UK confidence about coping 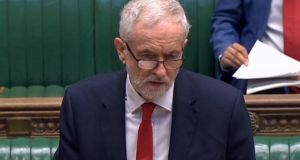 Britain’s Labour Party leader Jeremy Corbyn: “At a time of crisis, no one is an island, no one is self-made.” Photograph: PRU/AFP via Getty

Ten days after Britain shifted its strategy from mitigating the impact of the pandemic to trying to suppress the coronavirus, the first signs of hope appeared on Wednesday. Neil Ferguson, the Imperial College epidemiologist whose modelling prompted the change of course, told MPs that he and his colleagues were now reasonably confident that the National Health Service (NHS) will be able to cope with the pandemic.

“If the current measures work as we would expect them to, then we will see intensive care unit demand peak in approximately 2½ to three weeks’ time, and then decline thereafter,” he told the House of Commons science and technology committee.

“The reason for that lag is because it takes people something like two to three weeks from being infected to being in an intensive care unit. So the measures put in place last week, intensified this week, we think will have had a significant effect on transmission. But it takes that time for it to propagate through to healthcare demand.”

Now that Boris Johnson’s scientific advisers have embraced the World Health Organisation (WHO) orthodoxy, they are seeking to improve their testing capacity and are starting to talk about contact tracing, which they have not prioritised until now. The most urgent tests are antigen tests, which are conducted just after someone has been infected and determine if someone actually has the coronavirus.

British health authorities are also evaluating antibody tests which can be conducted after someone has recovered from the virus – these will show if they had it and have perhaps developed some immunity.

In terms of the national mood, the most important news may have been that more than 400,000 people had signed up within 24 hours to sign up as volunteers to help the NHS and their neighbours. After days of headlines about rapacious shoppers stripping supermarket shelves and greedy bosses putting their workers at risk, it was reassuring evidence of the deep reservoir of decency within society.

Jeremy Corbyn, in his last outing in parliament as Labour leader, caught the mood when he said the crisis showed how deeply people depended on one another.

“We’ll only come through this as a society through a huge collective effort. At a time of crisis, no one is an island, no one is self-made. The wellbeing of the wealthiest corporate chief executive officer depends on the outsourced worker cleaning their office. At times like this, we have to recognise the value of each other and the strength of a society that cares for each other and cares for all,” he said.