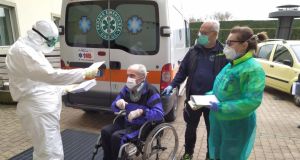 A medical employee checks the papers as a elderly patient sitting in a wheel chair arrives at Hotel Winter Garden in Grassobbio, Bergamo, Italy, which became a recovery for patients healed from coronavirus for their quarantine after hospital’s discharge on Wednesday. Photograph: Filippo Venezia/EPA

More than 680 people have died from coronavirus in Italy in the last 24 hours, the Civil Protection Agency said on Wednesday, as concerns grew that the disease was spreading more towards the south of the country.

The death toll increased by 683 on Wednesday. That was lower than a spike of 743 on Tuesday but more than the totals of the previous two days and the third highest daily tally since the outbreak emerged in northern regions on February 21st.

Italy has seen more fatalities than any other country, with latest figures showing that 7,503 people have died from the infection in barely a month.

The northern region of Lombardy, by far the hardest-hit, showed a steep decline in the number of deaths and new infections on Wednesday, raising hopes that the epidemic may be slowing at its original epicentre.

However, optimism was tempered by warnings from the south, where contagion and deaths are far less widespread but are rising steadily, and could overwhelm a health service which is much less well equipped than in the rich north.

“At this point there is the real prospect that Lombardy’s tragedy is about to become the south’s tragedy,” Vincenzo De Luca, president of the Campania region around Naples, wrote in an open letter to Prime Minister Giuseppe Conte.

“We are on the eve of a major expansion of infections which may not be sustainable,” he said, complaining that the central government had failed to provide Campania with promised ventilators and other life-saving equipment.

The total number of confirmed cases in Italy rose to 74,386 from a previous 69,176, the Civil Protection Agency said.

The rise of 7.5 per cent was the lowest since the outbreak began, but only severely ill people are being tested and the head of the agency, Angelo Borrelli, said this week that the true number of infections was probably 10 times those officially recorded.

Coronavirus is “public enemy number one”, the World Health Organisation (WHO) said.

The global health body has urged countries on lockdown to take measures to “find, isolate, test, treat and trace” cases.

If they do not, then once lockdowns are lifted there could be a “resurgence” of the virus.

Dr Tedros said: “Aggressive measures to find, isolate, test, treat and trace are not only the best and fastest way out of extreme social and economic restrictions - they’re also the best way to prevent them.”

The WHO also said on Wednesday that countries which have locked down their populations to prevent the spread of the coronavirus need to use the time to find and attack the virus.

“Asking people to stay at home and shutting down population movement is buying time, and reducing pressure on health systems. On their own these measures won’t extinguish epidemics,” said Mr Tedros.

“We call on all countries to use this time to attack the virus,” Dr Tedros told a press conference.

Countries need to expand, train and deploy their health care and public health workforces, as well as implementing systems to find every suspected case, and ramping up testing, he said.

Spain registered 738 coronavirus fatalities over the past 24 hours in the steepest increase of the death toll since the pandemic hit the country, the health ministry reported on Wednesday.

The coronavirus pandemic has infected more than 424,000 people and killed at least 18,000 across the world. More than 108,000 people have recovered so far, mostly in China.

Mainland China reported a drop in new confirmed coronavirus cases on Wednesday as imported infections fell and no locally transmitted infections were reported, including in central Hubei province, the epicentre of the outbreak in China.

China is ramping up quarantine and screening rules for all international arrivals due to the risks from imported cases.

Quanzhou city in Fujian province will cancel all international and regional flights, starting March 26th, after four imported cases from the Philippines were found on Tuesday..

The number of new coronavirus cases totalled 47 on Tuesday, all of which were from travellers returning home, down from 78 a day earlier, the National Health Commission said.

The South Korean government said it plans to provide coronavirus testing materials to the United States in response to US president Donald Trump’s request for help.

The office of South Korean president Moon Jae-in said that Mr Trump had asked during a telephone conversation between the leaders whether South Korea could send medical equipment and supplies to help the United States cope with its outbreaks.

As of Wednesday, South Korea had tested around 358,000 people while reporting 9,137 infections and 126 deaths.

India’s population of 1.3 billion people has been ordered to stay at home under the world’s biggest lockdown in a bid to stop the coronavirus pandemic. The unprecedented move was aimed at keeping the virus from spreading and overwhelming India’s fragile healthcare system as it has done in parts of Europe, where infections are still surging. India has about 450 cases of the virus, but prime minister Narendra Modi warned that if he did not act now it could set the country back decades.

The coronavirus UK death toll has passed 460, on the day it was confirmed that the Prince of Wales tested positive for Covid-19.

NHS England said on Wednesday night that a further 28 people, aged between 47 and 93, have died after testing positive for coronavirus in England, bringing the total deaths in the UK to more than 460.

The 47-year-old did not have any underlying health conditions, NHS England said.

Earlier on Wednesday afternoon, prime minister Boris Johnson said that the UK is “coping very well indeed under the most challenging possible circumstances” and that the government was “massively ramping up” testing for coronavirus, as he announced that 405,000 people have now signed up as volunteers to help vulnerable people.

Speaking at the daily press conference inside Number 10, he added that he wanted to offer a “special thank you to everyone who has now volunteered to help the NHS.

“When we launched the appeal last night, we hoped to get 250,000 volunteers over a few days.

“That is already, in one day, as many volunteers as the population of Coventry.”

The figure was given as the Foreign Office announced that Steven Dick (37) the deputy head of mission at the British Embassy in Budapest, had died after contracting coronavirus.

Also on Wednesday, the Isle of Man announced it is to close its borders to all new arrivals in a bid to halt the spread of coronavirus.

Chief minister Howard Quayle said: “We have already closed our borders to any non-residents. We will now move to extend this to all arrivals.

“There will be no commercial flights or light aircraft permitted to land at Ronaldsway Airport beyond the last scheduled flight tomorrow [Thursday]. The only exceptions will be for emergency medical transportation and the mail flight.

“We will also stop all passenger arrivals by boat. This will come into force from the arrival of the Thursday night Ben-My-Chree sailing that is scheduled to arrive at 6am on Friday morning.

“The only exceptions to these travel restrictions will be a very limited group of people who are necessary for our critical national infrastructure or for the preservation of human life. These people will need prior written approval before they are allowed to travel.”

The new measures will be in place for an initial period of 21 days.

The German parliament is meeting to approve a €1 trillion aid package drawn up by the government to cushion the economic impact of the coronavirus outbreak.

In Slovakia, prime minister Igor Matovic said a government plane with 100,000 badly needed high quality respirators from Turkey has landed, and they will be immediately distributed to hospitals across the country.

In Russia, president Vladimir Putin has postponed a nationwide vote on proposed constitutional amendments that include a change that would allow him to seek another term in power. Russian authorities reported 658 cases of the new virus on Wednesday, with 163 new cases registered since the day before.

The Israeli government has approved new sweeping restrictions , including ordering the closure of all synagogues amid increased infections in places of worship. Places of worship largely had been kept open so long as gatherings have not had more than 10 people at a time who maintained a two-metre distance from each other.

Many in Israel’s insular ultra-Orthodox communities, however, have defied restrictions and gathered as usual for prayer and study, despite the pleas of rabbis and local authorities. That has led to tension with authorities and in at least one case, scuffles with police. Municipal workers also have been urging the ultra-Orthodox to go home, with little effect. - Agencies

1 Ireland could lose out as France lays claim to most of €5bn Brexit compensation fund
2 Miriam Lord: The Dáil's answer to John Wayne overcooks the ham slice, by slice, by slice
3 Q&A: What restrictions are going to be lifted next week?
4 Boy (4) left in hospital for over two years due to Tusla and HSE failings, report says
5 Majority of Covid-19 outbreaks in last week were in private houses
Real news has value SUBSCRIBE