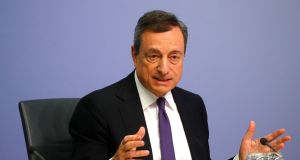 European governments must quickly absorb the economic shock of the coronavirus crisis, even at the cost of high debt, as the alternative is permanent economic destruction, former European Central Bank President Mario Draghi wrote in a Financial Times opinion piece on Wednesday.

Considered the saviour of the euro amid Europe’s debt crisis, Draghi argued that governments must protect jobs and production capacity, taking over and cancelling private-sector debt to protect jobs and maintain income to families that are innocent bystanders in the crisis.

“The alternative - a permanent destruction of productive capacity and therefore of the fiscal base - would be much more damaging to the economy and eventually to government credit,” Draghi, who stepped down in October, wrote in the opinion piece.

Arguing that the crisis was of “biblical proportions,” Draghi said banks must quickly lend to firms at zero cost and the capital needed for this lending must be provided by governments in the form of guarantees so jobs are maintained.

“The cost of these guarantees should not be based on the credit risk of the company that receives them, but should be zero regardless of the cost of funding of the government that issues them,” said Draghi, who has spoken rarely since leaving office.

He said liquidity must also be provided through debt markets or even the postal system, if that reaches people the quickest.

“And it has to be done immediately, avoiding bureaucratic delays.”

While some fear the cost of a surge in debt levels, Draghi argued that low interest rates are here to stay, so this would not add to government’s debt service costs. (Reuters)