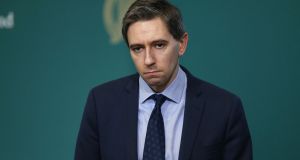 Minister for Health Simon Harris described an incident in which he was coughed on as ‘surreal’. Nick Bradshaw/The Irish Times

What is it with some people? What the hell is wrong with them?

As the country stirringly unites to combat a viral pandemic, a middle-aged man and a woman of similar age spot the Minister for Health walking along a Dublin side-street. So the man picks up speed until he draws level, then he steps in close and coughs theatrically in front of the Minister while laughing out loud at his hilarious impudence.

This witless poltroon says nothing. He scuttles back to his smiling companion with a self-satisfied grin across his stupid face.

In the midst of the nation’s inspirational community effort to keep coronavirus at bay, such displays of thundering gobshitery are mercifully uncommon. But they happen.

There has been talk of a new internet “challenge” daring young people to cough or even spit at random people and then record their victims’ horrified reactions. When it was mentioned at Wednesday morning’s Covid-19 media briefing in Government Buildings, nobody expected instant victim testimony from the platform.

Then Simon Harris revealed it happened to him on Tuesday and described what happened.

Afterwards, the Minister for Health said he hadn’t intended mentioning the incident.

“I’d nearly forgotten about it until somebody asked a question. I had heard about this so called ‘challenge’ over the weekend and how frightening and intimidating it can be for people who are targeted, particularly the elderly. This behaviour is totally unacceptable.”

In his own case, he was walking back to his office in Baggot Street when he “could feel something happening” and sensed a couple walking near him “picking up the pace” as they approached.

“A middle-aged couple, they weren’t that young – maybe late 30s, early 40s.” The episode only lasted a few seconds.

“I was a bit dazed by it. It just felt a bit surreal, but then, I’m finding everything a bit surreal at the moment. As the man walked away, looking very pleased with himself, I was wondering: ‘Did that really happen?’”

He is angry on behalf of the people who are working flat out to keep us on the right side of the coronavirus curve.

“I’m living in a world at the moment where everyone is busting their backsides. There are so many people working their asses off to help get all of us through this crisis. Dedicated, selfless people doing everything they possibly can. And then these gobshites come along . . .”

Another day, another press conference with the Taoiseach, the Minister for Health and Chief Medical Officer Tony Holohan dispensing the latest Covid-19 intelligence.

If truth be told, it was hard to concentrate with the deluge of virus-related information from all sides.

What about Prince Charles? Self-isolating with a skeleton staff of six servants in the restricted confines of the part of Scotland he owns?

Probably Meghan Markle’s fault because Meghan is blamed for every royal-related inconvenience these days. She probably took all the toilet roll too when she cleared off to Canada with the Harry formerly known as Prince.

He praised the hardworking staff in the health services, but said the Irish people are also making a very valuable contribution and helping to alleviate the burden on frontline workers.

Michael D was going way back to the Italia ’90 days, when the Irish team was on the crest of a soccer wave

This week is crucial, he said, urging citizens to keep maintaining the “physical distance” and the handwashing and the caring.

“Give it a lash this week. Do much more than the minimum and then we’ll see. Who knows? In weeks to come we’ll be able to say we did our bit in reducing the burden.”

Soccer-loving Michael D was going way back to the Italia ’90 days, when the Irish team was on the crest of a soccer wave and anything seemed possible. Give It a Lash Jack was the team song when the Boys in Green (and attendant army) decamped to Italy for the World Cup.

Great days for Ireland, when the fans were the toast of the tournament and they, and the people back home, were rightly proud of their reputation as model supporters. They lifted and united the people.

The people are united again, although this time in need of a lift. That famous phrase of Liverpool’s Bill Shankly is thoroughly debunked.

“Some people think football is a matter of life and death . . . I can assure them it is much more serious than that.”

He was wrong. Ireland is dealing with life and death now and it’s not a sport. But that same passion and the commitment, innate decency and love of country that buoyed a nation though those soaring soccer years is being harnessed today to great effect.

It’s like a war effort, with everyone (gobshites notwithstanding) doing their bit. The airlines, providing planes and crews to fly to China for supplies. Hozier and other stars singing to raise money online for emergency-hit charities.

(Michael D, by the way, says he sings Hozier songs when washing his hands for the requisite 20-plus seconds.)

Even Conor McGregor, God help us, is in on the act. In perhaps the most bizarre episode of another fast-moving pandemic day, the MMA fighter produced his own, highly entertaining presidential-style address on Tuesday.

“I would like to address my nation,” he modestly declared, before delivering his piece to camera, calling for a full “lockdown” and urging Leo Varadkar and the “two Simons” and the Chief-of-Staff of the Defence Forces among others to shut the airports and close the building sites.

“Health before wealth. Bingo halls is not enough.”

And then what? Only the Minister for Finance goes and gets involved.

“Paschal Donohoe slid into Conor’s DMs,” we were knowledgeably informed.

“His Doc Martens?” we replied.

No. It was a Twitter thing. Anyway, Donohoe sent McGregor a lovely message, hoping that he might help get the young people on board and on message in this time of crisis. “All the best, Paschal.”

And McGregor replied at great length, pledging there and then to pony up a million euro for vitally needed personal protection equipment for hospital staff in Leinster.

Look at the postmen and postwomen, calling in to check on vulnerable people on their rounds

Meanwhile, Fianna Fáil and Fine Gael tried to get down to the thorny problem of getting down to form a government. They held video conferences and everyone agreed time is of the essence. Due to constitutional requirements, never before has the destination of the next taoiseach’s (whoever gets the job) pick of 11 senators been so eagerly awaited. Legislation is stalled from next week until this happens.

But back to Simon Harris.

“There is a sense of national pride at the moment which is fantastic. Something weird is happening, everyone pulling together, everywhere. Look at the postmen and postwomen, calling in to check on vulnerable people on their rounds. They suggested this themselves. They approached their union and said they wanted to do this for free.

The situation is on a knife-edge. “We’re looking at what’s happening in Italy and none of us want to go there. I’m really worried, because this is not like the snow. There isn’t a thaw coming soon.”

We all need to stick together, and keep going as we are now.

“Gobshites” apart, Harris says he isn’t disappointed by people who might lapse in observing the new rules.

“I’m actually bowled over by the efforts. We are going to get through this.”