Review has found some cancers could have been prevented, it is understood 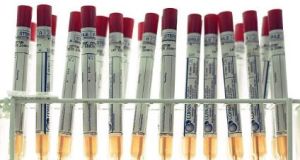 The extent of the individual divergences from the initial cervical smear results is not yet known, but the review has found some cancers could have been prevented, it is understood. File photograph: iStockPhoto

Large numbers of previously missed abnormalities have been uncovered in the biggest review of smear tests undertaken since cervical cancer screening began in Ireland.

The review led by the Royal College of Obstetricians and Gynaecologists in the UK has found hundreds of “discordant” results after re-examining the slides of over 1,000 women who had been tested for the disease under CervicalCheck, were given the all-clear and later developed cancer, according to an informed source.

Discordant means the re-examination of the smear test by Royal College reviewers has produced a result that is different from the original finding by CervicalCheck.

The extent of the individual divergences from the initial results is not yet known, but the review has found some cancers could have been prevented, it is understood.

The college is due to submit an aggregate report on its findings to Minister for Health Simon Harris shortly.

Small discordances between the original smear and the review could be of little consequence, but larger ones suggest a woman’s treatment and outcome might have been different.

The number of discordant results is likely to renew the focus on CervicalCheck, which was thrown into crisis in April 2018 when it emerged the results of a previous, more limited review of slides by the screening programme had not been disclosed to affected women.

The HSE has said that where there is discordance between a woman’s original smear tests and the review results, it will provide access to a package of State supports, including a medical card and counselling.

These are currently available only to the 221-plus group of women who were affected by the earlier review of tests.

Some affected women may also be entitled to make a claim under the tribunal being established by the Government in response to the controversy.

Mr Harris on Monday opened the inaugural meeting of the 20-member National Screening Advisory Committee, established in response to the CervicalCheck controversy. It was set up to advise on new proposals for screening and on revisions to existing programmes.

The review was not blinded, as reviewers knew that the women whose slides they were re-examining had gone on to develop cervical cancer. This, in the view of many experts, gives rise to a “hindsight bias” that is likely to skew the result.

Addressing the Oireachtas health committee in September, the head of the HSE women and infant health programme, Dr Peter McKenna, said “the only fair way” to do reviews of screening tests was blinded, where an abnormal smear is mixed in with 10 or 20 normal smears.

There is no internationally accepted best practice for conducting such reviews, he added.

The review takes in both the 221 group of women at the centre of last year’s controversy over CervicalCheck and a separate cohort of women whose cancers were notified to the National Cancer Registry but were not audited.

It was commissioned in May 2018 with the aim of providing a comprehensive overview of the screening history of all women diagnosed with cervical cancer over the past decade.

It was supposed to report over a year ago, but there were delays in setting it up, and one-third of women declined to participate.

The process of telling women who consented to a rescreening of their individual results is nearing completion. This has also taken longer than expected, leading to a delay in the planned publication of the aggregate report summarising the overall findings of the review.