Irish healthcare workers among best informed in Europe about antibiotic use 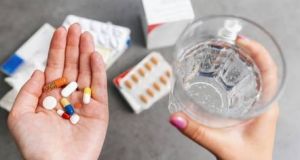 The Irish Patients’ Association says 33,000 people a year die in Europe as a direct consequence of an infection from antibiotic-resistant bacteria. Photograph: Getty Images

Irish healthcare workers are among the best informed in Europe about antibiotic use and resistance, a new survey indicates.

Over 70 per cent of Irish health professionals were able to answer seven questions out of seven on the issue correctly, according to the study by the European Centre for Disease Prevention and Control. Only Croatia did better.

The true-or-false questions included the statements “antibiotics are effective against viruses” (false) and “antibiotic resistant bacteria can spread from person to person” (true).

Patients should not expect a script when they go to the doctor. Indeed they should ask their doctor ‘Do I really need this antibiotic?'

However, the study, released for European Antibiotic Awareness Day on Monday, shows one Irish doctor in eight reported prescribing an antibiotic in the previous week because they had no time. One Irish doctor in 10 said they had written a prescription for one to maintain a relationship with a patient.

Describing these results as “concerning”, the Irish Patients’ Association pointed out that 33,000 people a year die in Europe as a direct consequence of an infection from antibiotic-resistant bacteria.

“Patients should not expect a script when they go to the doctor. Indeed they should ask their doctor ‘Do I really need this antibiotic?’” according to its spokesman Stephen McMahon.

With antibiotic resistance on the rise it is estimated that by 2050, 10 million people per year will die due to infections caused by antibiotic-resistant bacteria unless action is taken now.

Addressing ahead of a public meeting on the issue in Galway on Monday evening, Dr Dearbháile Morris, co-director of the school of medicine at NUI Galway, said the only effective way to tackle the problem of antibiotic resistance was for all sectors of society to work together.

What is your knowledge of antibiotics?

Say whether the following questions are true or false:

- Antibiotics are effective against viruses

- Antibiotics are effective against cold and flu

- Taking antibiotics has associated side effects or

risks such as diarrhoea, colitis, allergies

- Antibiotic-resistant bacteria can spread from

- Every person treated with antibiotics is at an

(Answer: the first two statements are false, and the rest are true)

Seanad voting rights case asked: ‘Is there a constitution in the world without oddities?’ 17:37
Covid-19 outbreaks among third-level students jump 20-fold in a week 17:35
Alien species and biodiversity projects to benefit from €1.35m 17:26
Hospital apologises to woman with terminal cervical cancer 17:24
Illegal adoption: Rapporteur calls for access to birth certificates 17:23