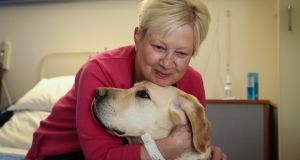 Kim Murphy, who is blind, and her guide dog Jango in Tallaght Hospital. Photograph: Crispin Rodwell

Just as the Health Service Executive winter plan was being announced with the aim of keeping patients out of overcrowded hospitals, one woman found herself being admitted to hospital for three days, in her view unnecessarily.

Kim Murphy, from Athy, Co Kildare, phoned The Irish Times on Thursday from Tallaght Hospital, where a bed had just been found for her and her guide dog, Jango.

An active 60-year-old despite her blindness, Ms Murphy said it was “horrendous” she would be taking up a bed for three days “just to receive an injection” when dozens of very sick patients needed one.

She needs twice-daily injections, spaced 12 hours apart, to prevent blood clotting and control a chronic health condition. Normally, this is administered to her by her husband, but he has to go away on business over the coming days.

Her community intervention team initially told Ms Murphy that a member of staff could administer the injections except for on Thursday evening, so she would have to spend a night in the hospital. They offered to transport her to Tallaght by taxi.

She says she reluctantly “swallowed this pill” and agreed. Because of her guide dog, she needs a single room in the hospital.

However, the team rang her on Thursday to say the arrangement was not possible because staff were not available to administer injections after 5pm at weekends. As a result, she would have to spend three nights in the hospital.

They later told her they had found a nursing home to accommodate her, but Ms Murphy said she refused this because it was primarily for elderly patients and those with dementia.

“Despite being 60 and blind, I am a very active person and I do not have a disability. This type of nursing home would be completely inappropriate for someone like me with a dog.”

As a result, she was brought to Tallaght and had to wait for several hours while a bed was found. Ms Murphy said waiting in an overcrowded hospital was stressful, but she was more upset about potentially taking a bed from patients who need it more.

“I have the highest regard for the staff here and the hospital has been very good to me. But I’m now taking up an acute bed when I’m not an acute patient and there are 30 patients or so on trolleys. They need it more than I do.”

The solution, she says, would have been for the HSE to pay a private nurse to give the injections for the few days.

Tallaght Hospital said it could not comment on individual cases. The HSE, whose community healthcare organisations are responsible for community services, has been contacted about the case.