Mourners told even when it was too late to change her fate, she helped create new health guidelines 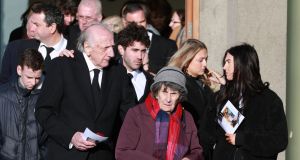 Orla Church, one of the 221 women caught up in the CervicalCheck controversy, was remembered at her funeral on Tuesday as a feisty daughter, sister and aunt who revelled in family debates, Sunday lunches and enjoyed a glass of red wine.

“She was a strong, witty, intelligent, forceful and articulate woman,” her younger brother David told about 600 people in the Church of Our Lady of Consolation in Donnycarney, Dublin. “[She was] the boss of the family, the glue that kept us together.”

Ms Church (54), who died on January 19th, was the 21st woman to die arising out of the CervicalCheck smear tests scandal. Her High Court legal action against the Health Service Executive and the United States laboratory, Quest Diagnostics, was contested but settled, after mediation and without admission of liability, days before her death.

A member of the 221+ CervicalCheck Patient Support Group, Ms Church was a low-key campaigner. She worked with the HSE on devising guidance for doctors and with the Irish Cancer Society but was less in the public eye that other high-profile campaigners such as Vicky Phelan and Emma Mhic Mhathúna.

Her plain wooden coffin, dressed with a spray of white lilies and greenery, was led into the church by her seven nieces, Ciara, Alexandra, Ellen, Rachel, Sofia, Gabrielle and Ruby, to the strains of Joy of My Heart, played by the ensemble Encore Occasions.

The only reason people grieved, said Father Vasyl Kornitsky, “is because we love”.

The symbols of her life included a portrait photograph of herself wearing a striking bright red top and white skirt, a photo of all her nieces and nephews to whom she was devoted, and a ceramic hedgehog, an acknowledgement of her great love of animals.

She would take in wounded pigeons and sea gulls, said David, stray cats and hedgehogs to such an extent that her garden resembled a zoo. When a hedgehog disappeared once, she printed “missing” posters and put them up in the neighbourhood – to good effect.

A neighbour rang, said David, and “Hedgie” was returned to the garden “where he lived happily ever after”.

Ms Church loved art galleries, Chez Max restaurant, and her friends. With colleagues from the Central Bank where she worked, she sang in a choir named Bank Notes.

She loved to travel, said David, and for a time in her late teens she lived in France. While there, she developed a fondness for French cooking, especially the use of cream and garlic, and for French wine.

“But she was very open minded,” said David, “and loved wine from other countries too.”

She “had an opinion on everything.”

“She really enjoyed debating, or an argument as she would call it. She won most of them . . . Her legendary Sunday dinners were not to be missed.”

His sister had lived for five years in London up to 1994 and it was a testament to the friendships she made then that, 25 years later, so many of those friends had travelled to her funeral.

He spoke of his sister’s reaction to her situation.

“Orla campaigned behind the scenes for the improvement of health services for women. Even when she knew it was too late to change her own fate, she worked alongside health professionals creating guidelines for doctors . . . I know Orla would take due comfort in knowing that the work she was involved in will make a difference in the lives of women in the future.”

In his homily, Fr Kornitsky spoke of God’s love.

“God knows every single sorrow of our lives,” he said, “every beat of our hearts.”

Jesus had taken Orla “into His beautiful arms in the beautiful mansion that He had prepared for her,” he said.

Her coffin was escorted from the church by her nephews, Stephen, Darragh, Matthew, Charlie and Callum, followed by her parents, chief mourners Charlie and Maureen Church.

Music included Over the Rainbow, The Lord is My Light and My Help, Ave Maria, Songbird, Pie Jesu, To Where You Are, Down to the River to Play, and The Parting Glass.

After her funeral Mass, Ms Church was laid to rest at Balgriffin Cemetery.