‘When the dust settles, we won’t have much change from €2bn’ 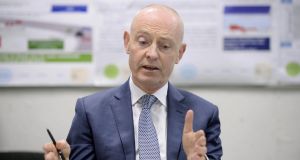 Members of the Oireachtas health committee have criticised a “catastrophic” and “unprecedented” increase in the cost of building the new national children’s hospital, which is now projected to cost €1.43 billion.

The project team building the hospital has “completely and catastrophically” failed in its job and in its obligations to the State by failing to control costs, Fianna Fáil health spokesman Stephen Donnelly told a hearing of the committee on Wednesday morning.

“When the dust settles, we won’t have much change from €2 billion” from this project, he said.

By then, the overspend will have reached €1-€1.5 billion, he predicted, bigger than the entire national fiscal space last year.

Because of the cost overruns in the project at St James’s Hospital, a wide variety of other infrastructural projects “won’t happen”, he pointed out.

“This is the reality of the incompetence and failure in relation to financial controls from your board,” he said, addressing witnesses Tom Costello, chairman of the National Paediatric Hospital Development Board, and John Pollock, project director.

Officials from the Department of Health are to be called before the committee next week to account for their oversight of the wildly overspending project. The Dáil Public Accounts Committee is also set to quiz officials on the issue later this month.

On Wednesday, health committee chairman Dr Michael Harty (Independent) said TDs were frustrated and angry at the “unprecedented” overrun, which would have knock-on effects on all capital investment in the years to come.

The cost of the project has risen from an estimated €800 million in 2014, to €983 million in 2017, and €1.43 billion now. Equipping the building and providing IT pushes this bill up to €1.73 billion; this does not include the cost of family accommodation, a research centre, excess construction inflation and any other changes to clinical standards.

Mr Costello said the project team was deeply disappointed at the cost increases and believed there were lessons to be learned.

The team went about the process in a competent and professional manner, he said. “If we were to start again on a project of this scale and complexity, we would adopt the same procurement approach.”

The hospital was a huge project and would result in one of the biggest children’s hospitals in the world. However, it was also extraordinarily complex, and the infrastructure needed to deliver a fully digital hospital was “absolutely enormous”.

The complexity of these services was not fully recognised in the early stage design, Mr Costello acknowledged.

For example, the project required 5km of cables in different sizes, and the “quantum” required had not been fully defined in the initial documentation.

Mr Costello and Mr Pollock were unable to say what the “premium” [extra cost] was for building the hospital on the confined St James’s site, but Mr Pollock told the committee none of the €320 million increase in construction costs could be ascribed to this factor.

Mr Pollock said the facility would be the first public digital hospital in Ireland, with more than 6,000 rooms, and this had a cost impact. Each room would have multiple data points and, to protect against crashes, there was a need for a “huge amount of duplication” including backup systems, power supplies and generators.

The hospital will include nine private suites for outpatient children to be treated by doctors working privately, the hearing heard.

Mr Donnelly asked if the hospital was costing about €900 million to build, what was the other €500 million for.

Mr Pollock said the core figure did not include the cost of building two satellite centres, equipping the hospital, decanting works, VAT and insurance.

Asked by Mr Donnelly how many extra beds were being delivered for this additional €500 million spend, he answered “there’s no extra beds”.

The children’s hospital will cost twice as much as any other hospital in the world on a per-bed basis, Mr Donnelly claimed. He rejected the project team’s contention that costs were in line with those in other big projects, if at the upper end.

“I don’t accept your benchmarking. The only explanation you have given is somehow it has become twice as expensive to build in Dublin. Yet the State owns the site and the cost of bricks and labouring have not gone up 300 per cent” in four years.

No one has lost their job, and no commercial contracts have been cancelled, as a result of the cost overruns, members of the board told Mr Donnelly.

The project team appeared to have underestimated “left, right and centre” the materials needed to build the hospital, he said.