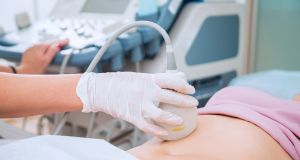 A multidisciplinary team was constituted at the Coombe hospital in Dublin earlier this month to consider the case of a patient whose foetus had been diagnosed with a foetal anomaly. File photograph: Getty Images

Decisions on whether or not to provide terminations in cases of foetal anomaly should be reached by multidisciplinary teams of doctors on a consensus basis, newly prepared guidelines indicate.

The multidisciplinary team (MDT) should be a formally-constituted committee of the hospital whose decisions are documented in clinical notes, according to the guidelines from the Institute of Obstetricians and Gynaecologists.

One such MDT was constituted at the Coombe hospital in Dublin earlier this month to consider the case of a patient whose foetus had been diagnosed with a foetal anomaly. The case was raised by two Opposition TDs in the Dáil last week after the woman’s request for a termination was refused.

In the Coombe case, treating doctors found that despite the presence of a “complex foetal anomaly” they did not believe the condition affecting the foetus was likely to lead to its death either before, or within 28 days of, birth – as required by legislation on terminations in cases of fatal foetal anomaly.

The MDT recommended a re-evaluation of the clinical condition of the foetus after four weeks.

According to the institute’s guidelines, a foetal medicine specialist should be involved once a diagnosis of fatal foetal anomaly is made.

“These cases are subsequently discussed by the MDT at the tertiary site (large teaching hospital) to reach a consensus about the diagnosis and prognosis, and to consider the option of termination of pregnancy being discussed with the parents, as well as any implications for maternal health where the pregnancy is ongoing.”

Appropriate investigations may need to be agreed by an MDT, and input by neonatologists may be necessary to agree on prognosis, the guidelines state.

Fatal foetal anomalies have an “almost certain” diagnosis and prognosis, including “a very high chance of death” in the womb or by 28 days of life, despite medical treatment, they state.

“It is good practice to ensure that foetal medicine MDT discussions should form an important component of the assessment of foetal anomalies, their prognosis and outcomes.”

OEIS, the condition affecting the foetus of the woman who unsuccessfully sought a termination last week at the Coombe hospital, is a serious but not necessarily fatal complex of medical issues.

A syndrome composed of four parts, OEIS stands for Omphalocele, Exstrophy of the bladder and rectum, Imperforate anus and Spinal Defects. The seriousness of a particular case will vary according to how serious the individual elements of the syndrome are.

The omphalocele involves organs protruding from the abdomen; this can vary from a portion of the intestine to a number of organs including the spleen, liver and full intestine.

With exstrophy of the bladder and rectum, the bladder in the womb is on the outside of the body and split into two halves. The colon and rectum are also open with a segment of the rectum situated between the halves of the bladder.

An imperforate anus is a congenital birth defect in which the opening to the anus is missing or blocked, and the baby cannot pass stools normally.

Serious as these conditions sound, they are often operable. Doctors treat the condition with a series of surgeries over time. Soon after birth, surgeons repair the omphalocele by closing the bladder halves and carrying out a colostomy procedure. Hip surgery may be carried out to bring together the child’s pelvis in support of the bladder. Bowel, urinary and genital surgery may also be required.

However, OEIS also involves spinal defects, such as spina bifida, whose seriousness can vary hugely from case to case and may ultimately determine the overall prognosis.

“The goals of treatment include an anatomic reconstruction and achieving bowel and urinary control, as well as normal sexual function,” according to Cedars-Sinai hospital in Los Angeles, which offers specialist services to families affected by the condition.

In the Coombe case, ultrasound findings were “consistent with OEIS”, doctors found.