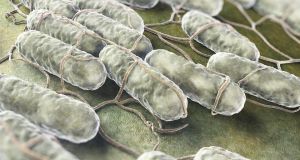 A culture of Salmonella bacteria on an organic surface. Photograph: iStock

The 414 cases of salmonella reported in 2017 was the highest number in Ireland in nearly a decade, with 35 cases associated with buffet food supplied to parties by the same catering premises.

The highest reported incidence was in children under five, with this effect being more pronounced among cases acquired in Ireland.

An annual epidemiological report published by the Health Protection Surveillance Centre (HPSC) said international travel was also a “large contributor” (40 per cent) to the overall burden of salmonellosis here, particularly in summer months.

Salmonellosis typically presents as an “acute enterocolitis”, with sudden onset of abdominal pain, diarrhoea, nausea, headache and occasionally vomiting, the HPSC said. Fever is almost always present. Enterocolitis is an inflammation of the digestive tract.

The 414 cases notified in 2017 – 378 confirmed and 36 probable – represent an increase of 37 per cent on salmonella cases the previous year.

The health surveillance centre said overall the figures corresponded to a crude incidence rate of 8.7 cases per 100,000 of the population.

Prior to this, the annual incidence rate had been decreasing gradually over eight years, from 10.8 in 2007 to between 5.7 and 6.3 in the past three years.

The increase in that area was largely due to a single large outbreak. Thirty-five confirmed and 37 probable cases of the S. Brandenburg type of salmonella were associated with several parties that obtained buffet food from the same catering premises.

Five people were hospitalised and one, Sandra O’Brien from Swords, Co Dublin, died.

The median duration of illness was seven days (range 1-35 days), based on observations for 190 cases. Thirty-five per cent of cases were hospitalised.

Among travel-associated cases, the most common countries of infection reported were Spain, which accounted for 38 cases, Thailand 11, Vietnam 10 and Portugal 10.