Little in HSE service plan to spark enthusiasm for future 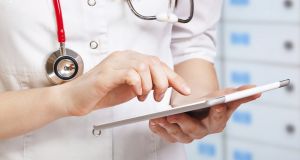 There was much talk about our bigger, older population and the demands this was putting on the health service, though this should hardly come as a surprise

In the years of cutbacks the publication of a HSE service plan would invariably throw the health service into a political squall. But with an extra €1 billion in funding available since last year, the 2017 plan should be setting sail with a fair following wind.

Yet the launch of the document in HSE headquarters at Dr Steevens’ Hospital in Dublin was a torpid affair despite the presence of director general Tony O’Brien and his officials, along with Minister for Health Simon Harris.

There was little new to spark enthusiasm for the future of the service, and no sign of a broader vision to improve things. The document itself was less than half the size of last year’s plan.

Targeted improvements were modest and incorporeal – for example, the aim of improving “patient experience time” in overcrowded emergency departments by a mere 5 per cent.

Yet equally, and thankfully, there were no obvious cutbacks that might stoke public anger or leave interest groups feeling aggrieved.

It was, as Social Democrat TD Róisín Shortall put it, a case of “merely treading water”.

There was much talk about our bigger, older population and the demands this was putting on the health service, though this should hardly come as a surprise. (There was no talk about areas where demand is declining – for example, there were 2,500 fewer births than anticipated last year).

Harris implored the HSE to do “more with more” and improve services but most of the extra money is already gone. For example, an extra €118 million is needed for pay and €51 million to pay pensions. Out of a €14 billion pot, the biggest in history, there is just €36.5 million for new service developments.

O’Brien said recently that 80 per cent of the health service worked well, while the rest could be improved. This is the 20 per cent that gives us 500,000 people on waiting lists, and yesterday over 530 patients on trolleys.

Some of the initiatives in the plan will make a dent in inpatient lists, but there was nothing to change this overall reality.

Political interference serves to prevent much-needed clinical decisions being made in various parts of the country.

Harris, after six months in post, talks a good game, and has demonstrated energy and empathy, but has little to show for the extra billion in the system.

The waiting lists continue to climb; the traditional winter spike in hospital overcrowding has set in earlier and deeper.

Only the weariness of the public, inured to the long-term problems of the health service, has saved him from a harsher verdict – so far.